Facebook’s CEO Mark Zuckerberg returned to Capitol Hill to testify before Congress on Oct. 23 about the company’s planned use of the cryptocurrency it is backing, Libra, attempting to debunk the voluminous number of concerns surrounding Facebook’s regulatory measures. This marks Zuckerberg’s first testimony to Congress since his last journey to Capitol Hill back in April 2018 after the Cambridge Analytica data breach.

Unfortunately, there was very little that both lawmakers and consumers took away from the hearing, which can be attributed to a combination of Congress’ continued lack of understanding of the significance of Facebook’s role in Silicon Valley and Zuckerberg’s inability to take account for the billion users he so passionately believes he is helping. 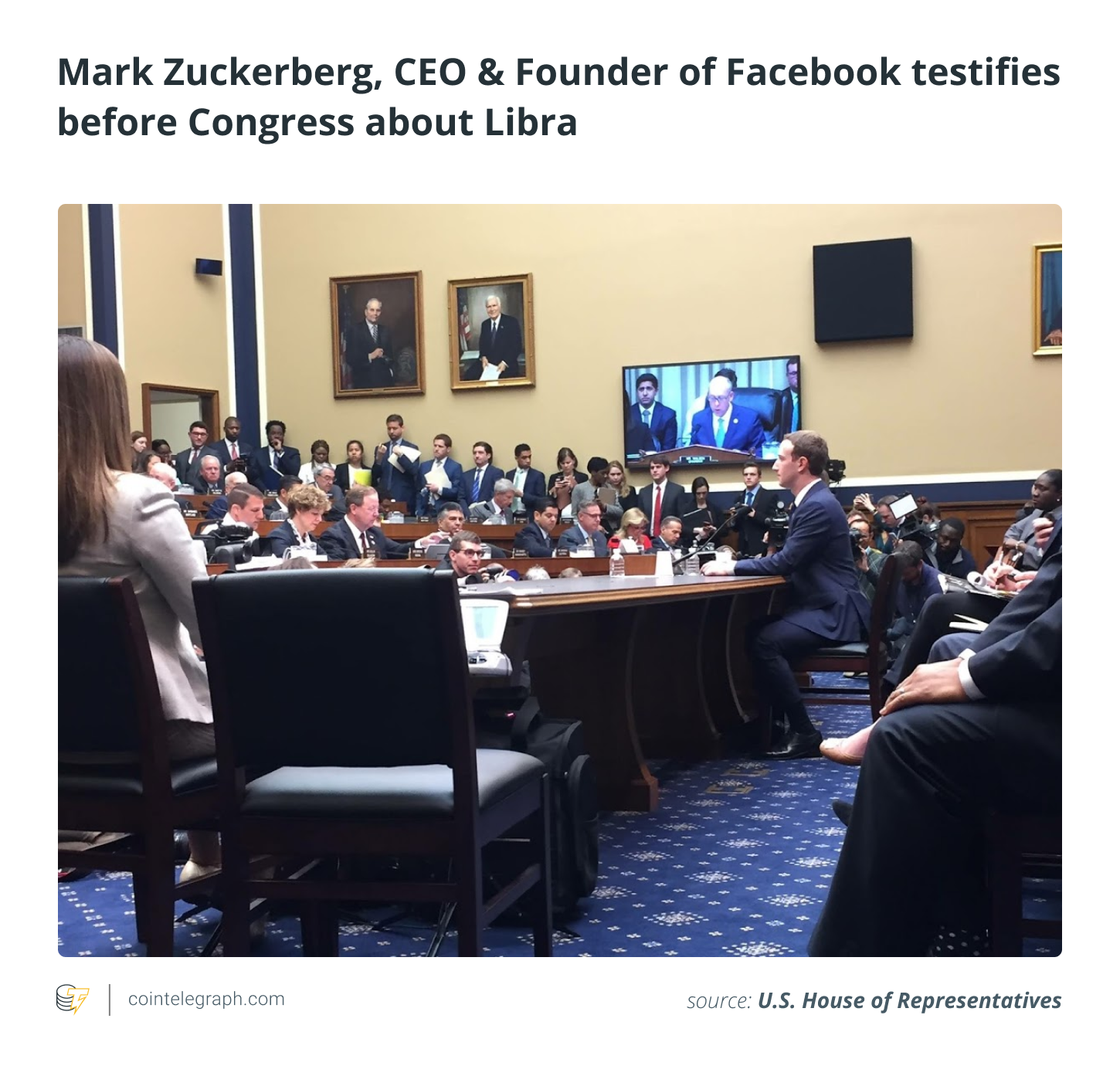 A shocking question to ask…or is it? While it’s no surprise that Zuckerberg faced a hostile line of questioning from Congress, one of the more surprising comments came from the Democratic Representative from California, Maxine Waters, who chairs the House Financial Services Committee. She stated that Facebook’s Libra would “create many concerns,” Facebook’s time may be running out, and perhaps the company should be broken up altogether.

Growing more powerful by the day, Facebook has continued to prove that it has the power to be a market leader, and its billion users spread across the globe have come to trust the social media giant. However, with the ongoing scrutiny surrounding the company’s data collection methods and internal security protocols, Congress is not only concerned about the consumer digital footprint, but also Facebook’s entire footprint. Waters declared:

“Perhaps you believe that you’re above the law, and it appears that you are aggressively increasing the size of your company, and are willing to step over anyone, including your competitors, women, people of color, your own users, and even our democracy to get what you want.”

Waters further explained that “…in fact, [Facebook] [has] opened up a serious discussion about whether Facebook should be broken up.”

Facebook has no business in the digital money space… yet

Zuckerberg’s belief that he doesn’t control The Libra Association should be laid to rest, as this is nothing more than willful ignorance toward the reality lying before Facebook — it needs to take accountability for its data collection policies and past conduct before it can even begin to think about expanding into the digital money space.

While Zuckerberg indicated in his prepared statement to Congress that, “[Facebook] support[s] Libra delaying its launch until it has fully addressed U.S. regulatory concerns,” lawmakers still need to recognize that before it can address Facebook’s cryptocurrency project, it needs to see statistical and numerical proof on how the company has responded to the Federal Trade Commission’s recent settlement-order following the investigation into the company’s data security practices.

“I believe this is something that needs to get built, but I understand we’re not the ideal messenger right now,” Zuckerberg expressed in his initial statement to Congress. “We’ve faced a lot of issues over the past few years,” he went on to add, noting Libra’s purpose falls in sync with the company’s mission of empowering users.

No. Forget the U.S. regulatory concerns and forget this “mission” of empowering people, because it’s just not true. It’s all smoke and mirrors — an illusion of control given to the company’s users. Facebook can barely address its own internal security protocols with respect to user data, yet it wants to go global with further extending its access to even more financial information in a new world of money?

Let’s just face facts here — Facebook just isn’t ready to take on the world of digital currency — and evidently, seven of its 28 original partners and former advocates of the project, including PayPal, Mastercard, Visa, and eBay also agree with this sentiment, having recently dropped out of Libra’s payment program.

When asked by Congress why Libra’s former partners left, Zuckerberg responded that it was because “it’s a risky project and there has been a lot of scrutiny.” The hearing should have ended right there.

I reached out to Parul Gujral, the CEO and founder of Snowball, a San Francisco-based company that holds itself out as the first Smart Crypto Investment Automation company established in the age of digital money, and asked him what was most concerning to him as a millennial cryptocurrency investor and CEO about Zuckerberg’s recent testimony:

“I believe that everyone should be able to make international remittances without a middleman, high transaction fees, and delays. I also believe that if you are working with other people’s money, you should be held accountable. This is why Snowball decided to become a registered investment advisor and a fiduciary. Facebook should embrace regulation to rebuild the trust they have lost.”

Snowball’s mobile app was approved earlier this year by the U.S. Securities and Exchange Commission as a Registered Investment Advisor, becoming one of the first platforms of its kind to be registered with the SEC, which allows the company to make investment recommendations through its mobile application.

The team behind Snowball includes a slate of well-respected entrepreneurs including self-made millionaire and Instagram influencer Jason Stone, Parul Gujral, Michael Bucci, and a team of former CEX.io and Deloitte lead engineers, all of whom have extensive backgrounds in the investment realm. I went on to ask the Snowball founder to respond to Waters’ assertions that Facebook should be broken up, to which he again emphasized regulation, saying:

“Libra can survive only if it embraces regulation and focuses its efforts on developing nations. With the advent of global WiFi, 2.7 billion people will have access to the internet and these people will need an identity, a way to get a loan, build their credit histories, and transact across the internet.”

I have said it from the beginning, and I will continue to say it until my dying breath — convenience will always trump privacy, and there is no way around that.

When Facebook was born, it was ready, willing, and able to give the world the one thing it was missing: instantaneous global connectivity. But it came at the cost of our most sensitive and personal information being made available to the company and third-party services, who use it to “develop” their services more efficiently.

After watching and listening to Zuckerberg’s testimony, it’s fair to say that Congress still isn’t getting the answers it deserves. Since April 2018, Congress’ line of questioning was arguably a bit more improved toward Zuckerberg, but they still failed to really get anything substantively new out of the Facebook CEO, which leads me to believe one thing — they still don’t completely understand the bigger picture.

Lawmakers and regulators are still trying to wrap their legal minds around the roles in which social media, online marketing and digital currencies play in today’s digital age. But what we need to understand about Congress’ current investigation into Facebook and the scrutiny surrounding it is that this situation is not about digital money. It’s not about the Libra Association.

It’s all about taking Facebook back 15 years to its inception and targeting its line of questioning at the company’s mission and fundamental purpose. I can almost guarantee you that Facebook’s answer TODAY would be astronomically different, if not even more convoluted, littered with attempts to navigate away from that line of questioning.

Are we standing on the shoulders of giants?

Facebook users are standing on the shoulders of giants. No longer is it a community for First Amendment freedom of expression — rather, the company’s deceptive behavior seems better suited for an episode of “Black Mirror,” wanting its audience and users to believe they truly do retain control over their information and are being treated fairly.

As for Facebook’s data privacy measures, users are expected to abide by voluminous provisions in the company’s Terms of Service but have little to no control or remedy available to them by the company.

Voicing concerns proves equally as frustrating, as the company’s customer support platform is the poorest automated excuse for user relations in the realm of social media. It gives users the illusion that they have a means of control and an avenue of communication with the company.

In reality, it’s a 45-second waiting period for an inbound email that says your concern has been addressed while citing its inability to help you due to a lack of proof of violation, and links the useless FAQ Help Center. And why? Wolves care nothing for the opinions of sheep. Especially when there are billions of them spread across the globe.

Stop being stubborn and ask for help

If there’s anything to take away from this, it’s that there are laws that need to be addressed and implemented further into Facebook’s public scrutiny with respect to how the company continues to approach its business. But, there is a simple solution for the company: Reach out to experts and ask for assistance. There’s no shame in it.

Under the European Union’s General Data Protection Regulation, there is indeed a “right to be forgotten.” Consisting of 99 articles, the GDPR is a legal framework that requires businesses to protect the personal data and privacy of EU citizens for transactions that occur within EU member states.

If the First Amendment is anything to go by, Facebook, like the U.S. government, should not distort cyberspace and engage in content control yet cherry-pick what it chooses to allow on its platform.

Having a regulation that requires all social media companies of a certain size to appoint a content moderator that is responsible for the ultimate management of content across a universal spectrum is the next step in Congress’ attempt at regulating a company like Facebook.

Now, it will be interesting to see whether Project Libra is delayed or disassembled — either way, Congress needs to seriously step it up with either making an example of Facebook or redefining law and regulation for social media giants.

Add the “Snowball” effect to Libra?

Gujral expressed his and Snowball’s desire to assist Facebook with the Libra project, if given the chance:

“Snowball can help Libra as a platform integration to help move liquidity into stable assets that support emerging markets especially communities in the U.S. who are in need of financial inclusion to the next cycle of wealth generation of 2020 and beyond.”

The views, thoughts and opinions expressed here are the author’s alone and do not necessarily reflect or represent the views and opinions of Cointelegraph.

Andrew Rossow is a millennial attorney, law professor, entrepreneur, writer and speaker on privacy, cybersecurity, A.I., AR/VR, blockchain and digital monies. He has written for many outlets and contributed to cybersecurity and technology publications. Utilizing his millennial background to its fullest potential, Rossow provides a well-rounded perspective on social media crime, technology and privacy implications.