Since it was first launched back in August 2017, Bitcoin Cash (BCH) has failed to make an impact in terms of metrics like price and trading volume. Having said that, the altcoin, whose roots can be found in the epic Bitcoin (BTC) scaling debate of the mid-2010’s, still has its hardcore supporters. And new research shows these supporters are willing to mine BCH even when it would be more profitable to mine on the Bitcoin network.

Data shows someone is propping up Bitcoin Cash

Luxor Mining Pool Operator, Ethan Vera, has been looking at the rise of so-called “tribalist” mining on the Bitcoin Cash network. A tribalist miner is an individual or entity that mines a particular cryptocurrency for reasons other than just the block reward.

“If the hash price (value of hashrate) for a chain is below that of another for a long period of time you know that there are people propping it up for reasons beyond mining profitability,” Vera told Cointelegraph.

Vera shared data that indicates there was a rise in tribalist BCH mining in April, just as the cryptocurrency network was experiencing its first halving event.

As indicated by the above chart, BCH miners were leaving money on the table by not switching to BTC after the Bitcoin Cash network experienced its halving on April 8.

“On April 8th the hashprice of BCH was about 30% lower than that of Bitcoin,” explained Vera. “If the market was efficient then some miners would jump to BTC and BSV until the difficulty adjusted making them all equal again. This indicates that there [were] many tribalistic miners on the network that were willing to forego some mining profit to support the network.”

Vera acknowledges that this analysis relies on the assumption that miners are driven by profits and that there is very little cost to switch between mining on different cryptocurrency networks that use SHA-256 as their mechanism to enable proof-of-work.

“It mostly stopped recently,” added Vera. “Hashrate for BCH really dropped off. Maybe [the miners] figured they had done their job of supporting it through the halving?”

As I explained last year, BCH faced a bit of a security issue due to the fact that the network’s halving took place before BTC’s upcoming halving event.

Peter Ng, who is the founder of Hong Kong-based multinational mining operation and hosting facility provider JD Mining, was able to share his thoughts on why the existence of tribalist miners became more obvious in April.

“Post BCH halving there was a difficult adjustment algorithm gaming opportunity caused by abrupt difficulty discrepancy,” Ng told CoinTelegraph. “When DAA gaming and volatility is introduced, the baseline BCH-only miner hash rates become apparent. Usually, the volatility does not dip low enough for them to show.”

Ng added that the halving from 12.5 BCH to 6.25 BCH block subsidies in early April also led to a reduction in miners that are only interested in profits rather than the philosophical underpinnings of Bitcoin Cash.

According to Ng, there are many Bitcoin Cash miners who are driven by ideology rather than profits.

“But good miners are primarily driven by profit in this cutthroat industry and vote with their hashrate only when it matters in a cost efficient manner.” added Ng. “Long term pursuance of altruistic mining will drain away their resources, leaving them to have very little say when it matters.”

In terms of other factors that could have affected the Bitcoin Cash hashrate in April, Ng added, “BCH altruism may have been particularly pronounced in this period due to the recent controversial infrastructure funding plan event. There was also activity by a rogue miner looking to 51 percent attack a minor SHA-256 coin and they parked some of their hashrate in BCH during this period under the name Mining Dutch before attempting their attack.”

Vera believes that Bitmain was most likely the entity behind the unprofitable mining of BCH in April. During his time working as an investment banker at Goldman Sachs, Vera caught the end of Bitmain’s IPO process, which allowed him to gain a more in-depth look at the Bitcoin mining company. During this IPO process, which ultimately did not lead to Bitmain going public, it was revealed that Bitmain held 1 million BCH on their balance sheet.

It’s also no secret that Bitmain has been a huge proponent of Bitcoin Cash. In fact, the original development behind the Bitcoin ABC client, which created Bitcoin Cash via a hard fork, was funded by the Bitcoin Development Grant, which was tpartially sponsored by Bitmain. After failing to gain enough support for a hard-forking increase to Bitcoin’s block size limit in 2017, Bitmain threw a large amount of support behind the altcoin, becoming the most noteworthy backer of the project behind Bitcoin.com CEO Roger Ver. At one point, Bitmain was also only accepting Bitcoin Cash as payment for their mining hardware devices.

Bitmain republished a Bitcoin.com article about Bitcoin Cash on the company blog a few days before the altcoin launched, and the Bitcoin mining giant was also an early miner on the Bitcoin Cash network. It should be noted that problems associated with Bitcoin Cash’s original difficulty adjustment algorithm enabled a premine of sorts for miners who were pointing hashpower at the network before the algorithm was fixed and blocks were mined at regular intervals. These issues explain why BCH’s current supply is much higher than BTC’s (and why the BCH halving took place roughly a month before BTC’s).

Vera speculates that Bitmain could have been either using their own hardware to mine BCH or redirecting miners’ hashrate connected to one of their affiliated mining pools.

“They would pay the BTC [pay-per-share] rate for the hashrate but then take the hashrate and go mine BCH with it,” explained Vera.

“It’s unclear who the miners are without hard evidence, but you can make assumptions of who the players are in the industry that have significant stakes and incentives for BCH to survive,” said Blockware Solutions CEO Matt D’Souza when asked for his thoughts on who would mine the altcoin at a loss. “And they’re willing to mine and support the network as they’re supporting a large stake of BCH coin.”

According to D’Souza, the majority of the miners that stayed on Bitcoin Cash in the immediate aftermath of that network’s halving event were basically activist miners supporting their own personal stake in Bitcoin Cash rather than simply mining the post profitable SHA-256 cryptocurrency.

The Data Points to ViaBTC

As D’Souza and Vera indicate, it’s difficult to know who was willing to mine BCH despite the availability of larger profits on the BTC network without hard evidence. That said, the blockchain does show each major mining pool’s relative share of the BCH hashrate at any given time. 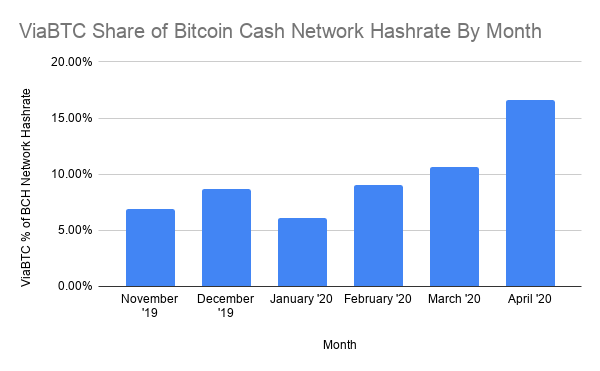 As the above chart shows, ViaBTC saw a rise in its relative share of the overall Bitcoin Cash network hashrate during the month of April, the same month that profitability of mining BCH dropped. ViaBTC’s share of the Bitcoin Cash network hashrate was 10.61% in March and then grew to 17.14% in April (only counting days after the BCH halving on the 8th).

Before the launch of Bitcoin Cash, ViaBTC was a strong supporter of Bitcoin Unlimited, which was software that would attempt a hard-forking increase of Bitcoin’s block size limit once a certain threshold of support was met and not implement the upgrade to the Bitcoin protocol known as Segregated Witness (SegWit). ViaBTC was also an early supporter of Bitcoin Cash—even launching a futures market on their exchange platform regarding the altcoin’s potential price before it existed.

It should also be noted that Bitmain is the only investor in ViaBTC. However, Antpool and BTC.com’s share of the Bitcoin Cash network hashrate fell from a combined 37.24% in March to 34.73% in April.

“ViaBTC is an interesting entity,” said Vera when asked about the mining pool. “In public they try to separate it from Bitmain as much as possible, probably for centralization concerns. But I would suspect those two teams are very close and work in coordination.”

What Does This “Tribalist Mining” Mean for Bitcoin?

More important than figuring out who has been behind the tribalist mining on the Bitcoin Cash network may be the implications of this sort of activity for Bitcoin itself.

D’Souza believes it’s interesting to think about the game theory that powers Bitcoin and the structure of incentives that allow it to operate without disruption for so long. There are sometimes alternative factors, such as a miner’s cryptocurrency portfolio, that can alter miners’ incentives.

“The value [is] in protecting the honey pot of BCH they own,” said D’Souza. “Think about how the Koch brothers donate millions [of dollars] to Republicans or how oil companies donate to lobbyists and political parties. This is essentially the equivalent incentive mechanism — spend a percentage of your honey pot to maintain or improve your positioning or present assets.”

D’Souza also thinks about this in the context of Bitcoin’s block reward subsidy, which will continue to be cut in half roughly every four years until that subsidy reaches zero.

“People have an incentive (financial, philosophical, survival, [or something else]) to fund miners so they continue to mine,” said D’Souza via Twitter DM.

In other words, the fact that some entities are mining BCH and ignoring the greater profits on BTC today could be a sign that other entities will be incentivized to keep miners going in an effort to protect their own interests as the block subsidy continues to fall over time.

“If BTC is around in 2140 when rewards end and the market cap is ten times higher that is $15 trillion,” explained D’Souza. “0.001% [of that] is $15 billion in mining incentive. That is six times greater than available rewards post halving.”