According to a recent report from crypto analytics specialists Chainalysis, Ethereum (ETH) has become the crypto platform of choice for scam artists. Its research suggests that 2018 saw far more sophisticated, higher-earning scams carried out using ETH, although the actual number of these crimes dropped significantly year on year.

Chainalysis identified over 2,000 scam Ethereum addresses, which have managed to secure funds from nearly 40,000 unique users in the network. In the space of two years, the modus operandi of scammers seems to have changed, according to data collected by Chainalysis.

Phishing, Ponzi schemes and initial coin offering (ICO) exits are still the most prevalent, but there has been a shifting trend.

As a result, the average amount sent to a scam address was nearly half of the amount in 2017. 2018 then saw the rise of elaborate Ponzi schemes and ICO exit scams, which yielded millions of dollars in income.

The reason for Ethereum’s perceived popularity with scam artists is its utility as a platform in which people can start and launch their own native cryptocurrency tokens through ICOs.

It is fairly easy for any project to put together a convincing website and business proposal, and raise funds in a decentralized way through the Ethereum blockchain. As the price of Bitcoin and other cryptocurrencies surged in 2017, investors easily parted ways with their crypto holdings, in the hopes of seeing massive returns on their investments.

Nefarious individuals and groups took advantage of the situation, which has inevitably fleeced many an unsuspecting investor.

The three ETH scams of choice

Firstly, it must be noted that Ethereum, as a platform, does not inherently provide the right environment or tools for scam artists to carrying out various schemes. The simple fact is that Ethereum is the platform of choice for entrepreneurs looking to launch decentralized, blockchain-based projects. As per data provided by Chainalysis, 82 percent of all ICOs are created on the Ethereum blockchain.

Phishing is considered to be the most popular type of ETH scams over the past few years. The modus operandi is fairly simple, scammers send potential victims emails or other communications that tricks them into sharing private financial information that gives attackers access to their ETH wallets.

Ponzi schemes have become more prevalent. These schemes promise investors abnormally high returns on an initial investment. Initial returns are paid out by new investment funds coming in, but eventually the scammers make off with most of the funds, leaving victims empty-handed.

ICO exits have also become more popular as of late. Criminals set up fake companies or projects with elaborate marketing material and websites. Funds are raised through ICOs but once that is complete, the criminals sell off the proceeds and disappear with all the capital, once again leaving investors with nothing.

As Chainalysis explains, phishing scams were the most-popular scamming method in 2017, but users became more wary the following year and the prevalence of these scams reduced. Furthermore, as criminals began to change up their methods of attack, the median amount of money stolen from individuals seemed to drop. 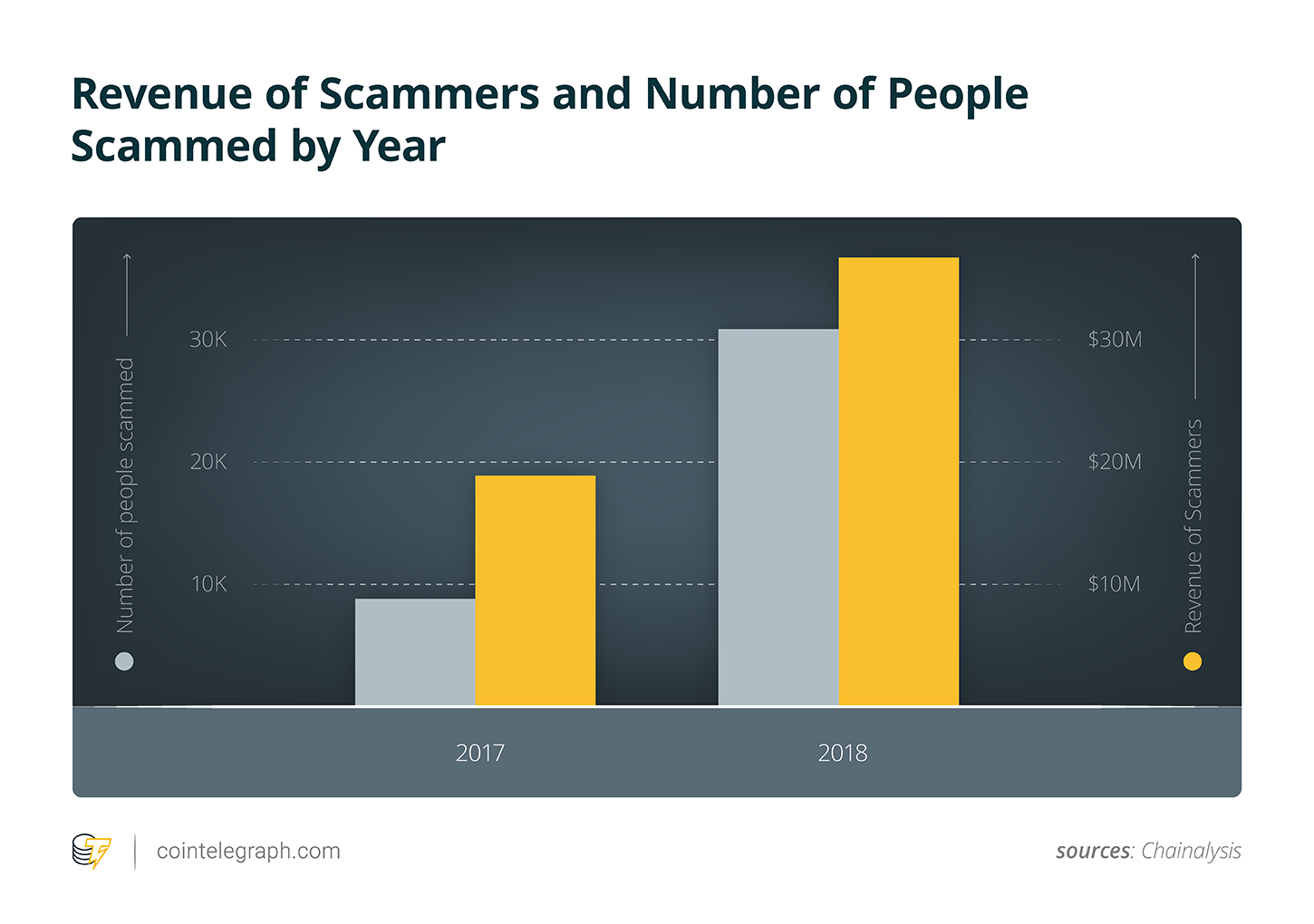 While the overall success of scams seems to be dwindling, a small number of these activities have managed to steal millions of dollars from unsuspecting investors.

What this could indicate is that criminals have had to get smarter in the way they dupe potential victims, with complex scams that have garnered massive amount of money. To this end, Chainalysis notes that twice as many users lost up to four times as much in 2018 compared to 2017.

As the graph below shows, the methods of scam artists has been in a constant state of flux for the past two years. 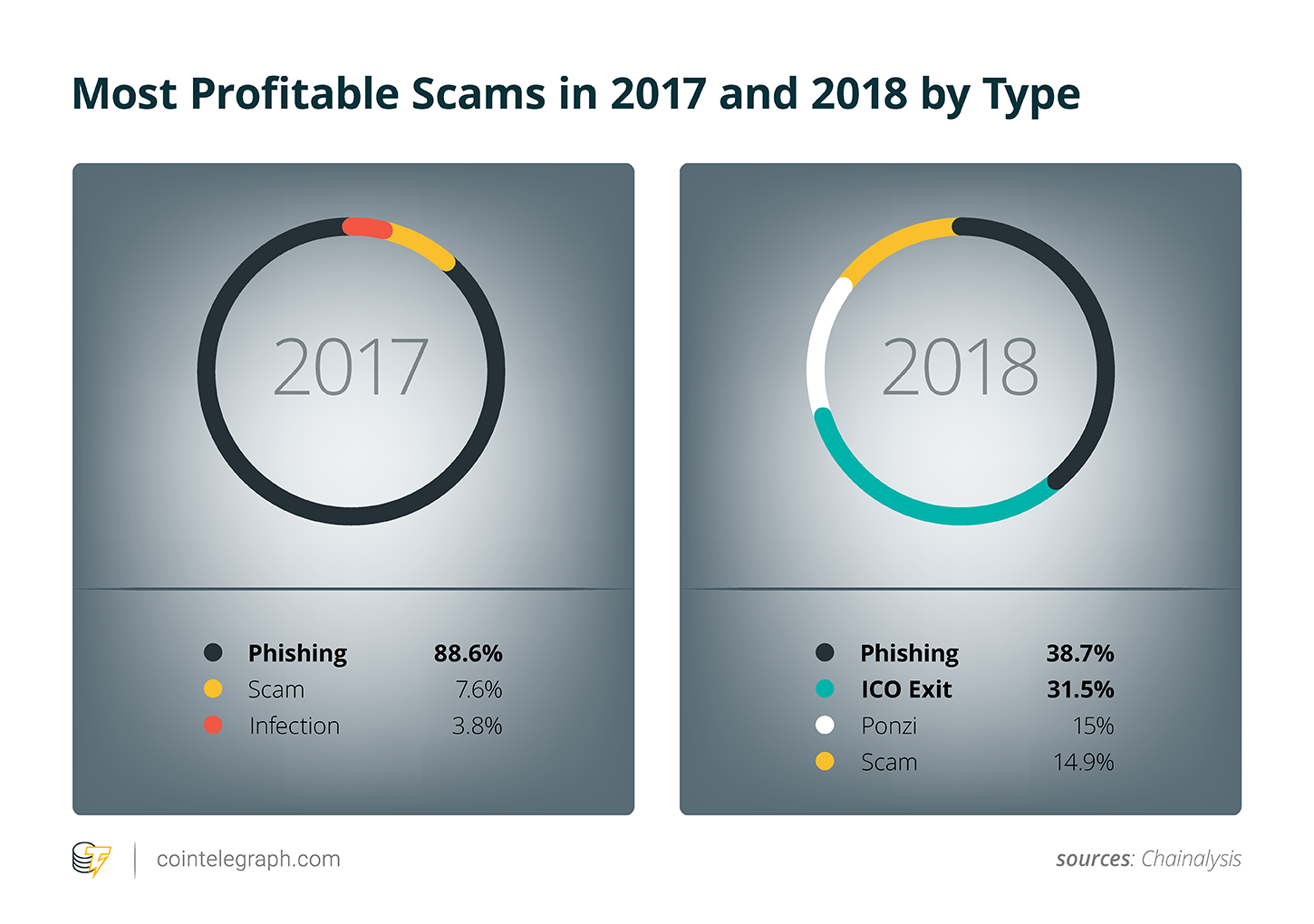 Toward the end of 2018, there were massive spikes in the yield from a couple of Ponzi schemes and ICO exit scams, showing that these projects still pose a big threat in the crypto ecosystem.

This data is backed up by a report from crypto analytics company Ciphertrace, which states that at least $725 million was lost in 2018 to scams including Ponzi schemes, ICO exits and fraudulent ICOs.

Thus, the trends of scams have changed dramatically over the past 24 months, and this seems likely to continue, according to Chainalysis.

Given the anonymous nature of decentralized technologies, the report suggests that criminals will use these platforms in the future to carry out their crimes.

Criminals could begin to use encrypted applications in 2019 like Telegram and WhatsApp, shifting away from darknet markets. Cryptocurrencies will continue to be a method to launder and move money, which will lead to further regulatory moves by authorities.