On Dec. 15, news broke that cryptocurrency payments firm and wallet provider FoPay had acquired Estonia-based digital currency trading platform AliExchange for 1 million of its native Foin (FOIN) tokens. If one were to go by Foin’s apparent value at the time, that would make the deal worth roughly $2.1 billion. Indeed, FoPay claimed as much in the press release that it issued. But Cointelegraph has found a trail of suspicious movements in Foin’s price history, as well as a web of suspect business relationships associated with the coin’s development.

Several crypto news sites covered the claim of a $2.1 billion acquisition uncritically. (Cointelegraph did too, though we removed our article within 15 minutes, as soon as we saw that the article had not gone through our normal fact-checking process.)

The payment was ostensibly made by the Swiss-based Foin Foundation — the coin’s development entity — which has 20 million FOIN in its capital reserve, or over 20% of the coin’s total supply. According to the press release, the company is planning to pay a small amount of Foin tokens to compensate existing AliExchange shareowners following the buyout settlement, while the bulk balance will be kept in AliExchange as liquidity and capital expenditure.

Foin price spikes leading up to and following acquisition

Looking deeper into Foin’s price movements and the companies’ operations, Cointelegraph discovered a number of red flags. The token came into existence in late July 2018, at a price around $400, gradually gaining in value throughout 2019 until a sharp upturn from $1,492 on Nov. 1 to around $2,574 on Dec. 15, when the company unveiled the exchange acquisition and announced a suspension of investor withdrawals.

FoPay suspended Foin withdrawals until Dec. 31, 2019 ostensibly due to the merger with AliExchange, stating that, “FOIN withdrawal service will resume on 1st January 2020. There will be NO further extension after this final deadline.”

Since the announcement of suspended withdrawals, the Foin price has surged even further to around $3,200 at press time, representing a near 70% month-on-month price increase. 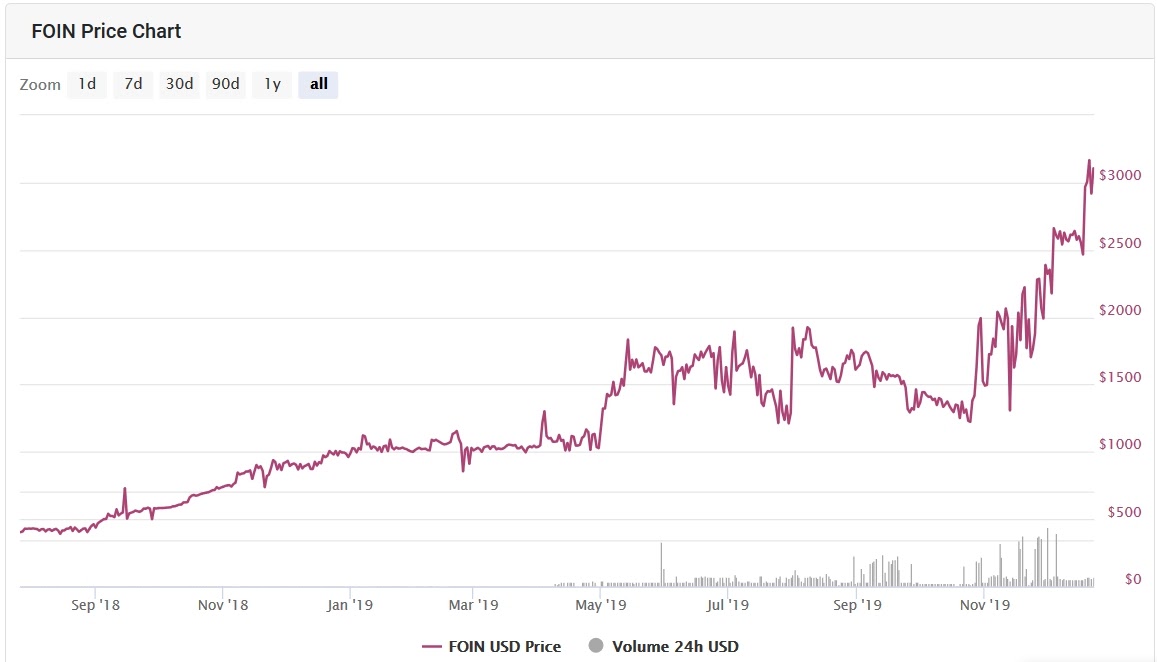 Previous statements from the firm suggest that FoPay believes that not allowing investors to liquidate their assets immediately will help enable a healthy, long-term investment strategy. In an AMA in April 2018, the organization said:

“Experience in the crypto market shows us that there is always a definite number of panic sellers that make price dive. We took care of it and build a proper strategy to fix this issue. Such users aren’t into long-term investments and don’t want to get good value out of it, they’re interested in short profits and seem to not understand how investments work. For everyone who trusts in crypto, we’re preparing the whole ecosystem for circulation and deposit grow due to this circulation.”

Over 90% of Foin trading volume is concentrated on Estonia-registered cryptocurrency exchange P2PB2B.io. The P2PB2B website was registered with an anonymous domain registration proxy service DomainsByProxy, whose motto is “Your identity is nobody’s business but ours.”

The only other crypto exchange where Foin is listed is HotBit. The domain of the exchange is also registered with DomainsByProxy.

On its website, HotBit claims to be registered in both Hong Kong and Estonia. However, Cointelegraph could not locate any business registration for HotBit in Estonia, only finding its Hong Kong registration.

Furthermore, Foin trades at two radically different prices on each exchange. At press time the token is trading aroune $3,200 on HotBit, while it has sky-rocketed to $4,000 on P2PB2B.

Initially, the Foin token was managed by the now-defunct site Financial.org, which claimed to be registered in the United Kingdom. According to the Financial Conduct Authority, the U.K.’s financial watchdog, Financial.org provided investment services without regulatory authorization.

To that end, the FCA included Financial.org to its watchlist last May and warned investors against dealing with the firm. At the time, some Foin investors told Reuters that Financial.org notified them that it would close their accounts and take 20% of their funds if they did not increase their minimum investment from $3,000 to $10,000.

Moreover, the Foin page on crypto data aggregator CoinMarketCap contains a warning stating: “We have received reports that Foin is affiliated with Financial.org, an organization that is on the watchlists of a number of regulators. Please perform your own due diligence.”

An employee at Dun & Bradstreet — a corporation that offers information on commercial credit as well as reports on businesses — confirmed to Cointelegraph that there was just one company on their global database that is registered with “Financial.org” in its name. The company is called “Viet Nam Financial.org Investment Company Limited” and is registered in Vietnam under the Investment License Code 0314733223.

Through a search on Vietnamese business registries, it proved possible to find a legal entity containing “Financial.org” in its name, with the registration number matching that of “Viet Nam Financial.org Investment Company Limited”:

On its official Facebook page Financial.org Vietnam, the company has actively promoted Foin-related products, including Foin Real Estate and accepting the token as a means of payment for luxury cars, as well as purported partnerships with crypto payment solution providers. One user review states that Foin “is a way to make money while you sleep.”

In June 2018, Financial.org unilaterally converted investors’ dollar accounts into its own Foin tokens and blocked them from withdrawing funds, after which it moved Foin wallets to a migration portal called FoinWalletMigration.com (FWM).

In September 2019, Financial.org ceased its operations, according to a notice on its website, which stated, “We have stopped operation. Instructions on how to claim your token(s) were distributed in August 2019.”

In mid-November, FoPay required investors to move their tokens from FWM to its platform, with a required fee of $8.75 for each token. The deadline to withdraw Foin tokens was set for Dec. 2, 2019.

The company stated, “FoPay will NOT be responsible for any failed Foin transfers from FWM as we are not able to follow up and trace any payments and transfers. Please refrain from asking FoPay questions with regard to FWM because we are not able to answer on behalf of FWM.”

The company’s requirement caused an immediate backlash from Foin holders, leading many users to think that Foin is probably coming to the end of its existence. Comments from token holders began circulating on social investing platform Investing.com:

“Everyone was angry because the company forced people to pay more to withdraw FOIN dc, while there was no guarantee that FOIN would have a good price when it came out on December 3.”

“Foin price is going up continuously, its unlogic , anybody can explain it?”

“Dear friends, don't invest in Foin Company I swear it has been more than two years since I bought 4500 Foin but it is not marketable and my life is in trouble”

“Next 1st Jan, if FOIN's management still postpone withdrawal from fopay as investor what is our effort to get back the money”

“At the time being I do not really take any value for serious. cause FOIN is not actively traded. For instance, while I am writing this post, this forum – at the top of the page – shows a current value of USD 3.192,97, whereas my FoPay wallet shows USD 2.707,29 … so I just wait up to the 15th, the announced start of trade, and then we all know the real value of FOIN. Casino pure, right?”

Some users started to suspect that Foin's volume was not real and questioned the creation of the FoPay wallet. Others apparently believed that the Foin price would even slump to zero after Dec. 2.

According to Bisnode, a Swiss commercial register and credit rating information source, the Foin Foundation was founded in the country in 2019 and registered as a non-profit organization in the canton of Zug. The Foin Foundation says its purpose is to support and promote research into blockchain and promote the training of talents and startups that operate in the blockchain sphere.

A spokesperson from the Swiss Financial Market Supervisory Authority (FINMA) told Cointelegraph that “the company mentioned has no authorisation from FINMA.”

Cointelegraph reached out to the Foin Foundation to clarify its relationship to Financial.org, but it has not yet replied.

The Estonian Financial Intelligence Unit (FIU) confirmed to Cointelegraph that AliExchange has three valid business licenses in Estonia: one for operating as a financial institution, one that allows it to operate as a cryptocurrency exchange, and another that allows the company to offer users a cryptocurrency wallet. The first license was granted on May 7, 2019 while the other two were granted in the first week of November 2019.

FoPay is owned and operated by Ukraine-registered company “Foins Blockchain Limited Liability Company,” registered under the identification code of the legal entity 42019553.

Upon registration, the founder of Foins Blockchain was indicated as Moldova-based individual Dmytro Lunhu, while the director as Ukrainian citizen Yevhen Petelin. According to the Foin official blog, the CEO of FoPay is Ruslan Salatov.

Cointelegraph reached out to Salatov for comment via LinkedIn, but did not receive a response as of press time. Salatov’s LinkedIn page does not mention any of his work on Foin, FoPay or seemingly related enterprises.

At press time, none of the organizations have responded to Cointelegraph’s requests for comment regarding their relationship to Financial.org or to each other. This story will be updated with their comments should they respond.

Due diligence on new token projects

While cryptocurrencies and digital assets are seeing increased adoption globally, problems of fraud and murky business practices still persist. As Cointelegraph has previously reported, cryptocurrencies have become a hotbed for scam activity thanks in part to the lure of anonymity and heterogeneous regulations and standards. By August 2019, crypto investors worldwide had lost $4.3 billion to scams, according to data from cryptocurrency analytics firm CipherTrace.

Investors in new digital assets should be aware of certain warning signs such as errors and bad research in a project’s whitepaper, hyperbolic claims about profits and scant details regarding the project’s staff and development.

Disclaimer: Cointelegraph does not endorse any content or product on this page. While we aim at providing you all important information that we could obtain, readers should do their own research before taking any actions related to the company and carry full responsibility for their decisions. This article can not be considered as an investment advice.