Leading United States derivative market CME Group pointed out that its Bitcoin (BTC) futures reported a record trading volume on April 4, according to their tweet.

Per the tweet, the volume of its Bitcoin futures hit an all-time-high of over 22,500 contracts on April 4, which is equivalent to about 112,700 BTC. The previous record has been hit on February 19 and was reportedly over 18,300 contracts, equivalent to 64,300 BTC. 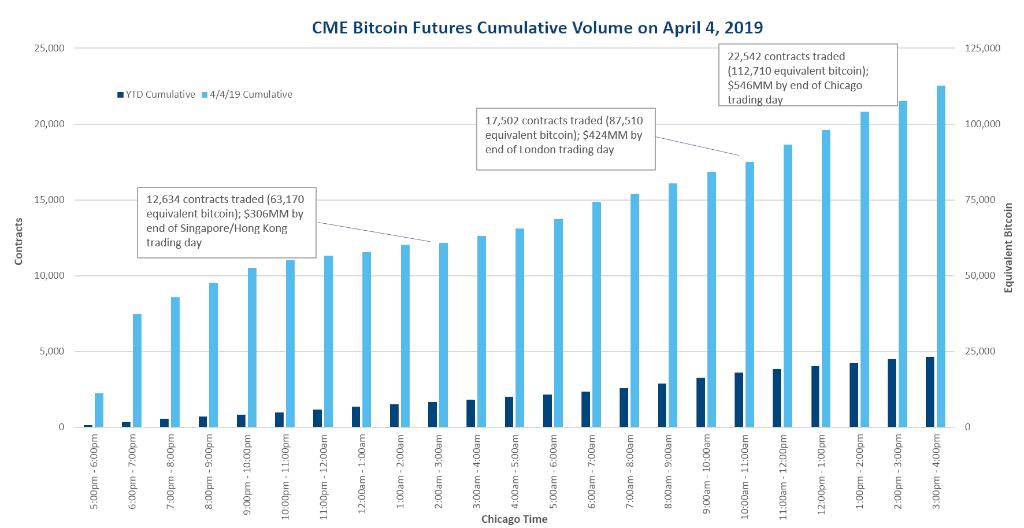 The CME Bitcoin Futures, according to a dedicated frequently asked questions page, were launched on December 17, 2017, and started trading the next day.

Bitcoin gained over 27% from Tuesday to Wednesday of this week, with Fundstrat Global Advisors co-founder Thomas Lee claiming that since it has now broken over its 200-day-moving-average, Bitcoin is currently in a bull market.

Last month, news broke that also United Kingdom-based crypto exchange and futures provider Crypto Facilities had seen its trading volumes grow by over 500% after being acquired by crypto exchange Kraken.

As Cointelegraph reported in March, CME Group told Business Insider that Bitcoin’s finite amount is a challenge for regulators.

In March, a Commodity Futures Trading Commission commissioner revealed that the U.S. regulator is actively working to approve multiple crypto-related applications, including for Bitcoin futures from institutional trading platform Bakkt.