As part of its current mid-term downtrend, Bitcoin (BTC) could be headed toward its 200-week moving average (MA), a level that has been a major historical bottom.

Since hitting its 2019 high of approximately $13,890, Bitcoin has seen lower highs indicative of a downward trend, at least in the mid-term.

After a corrective bounce up to $7,875 last week, Bitcoin was unable to shake its larger downtrend, heading back down to $7,285 by press time. The asset could ultimately have its sights set near $5,000 before a mid-term trend reversal as its charts look mostly bearish at present. 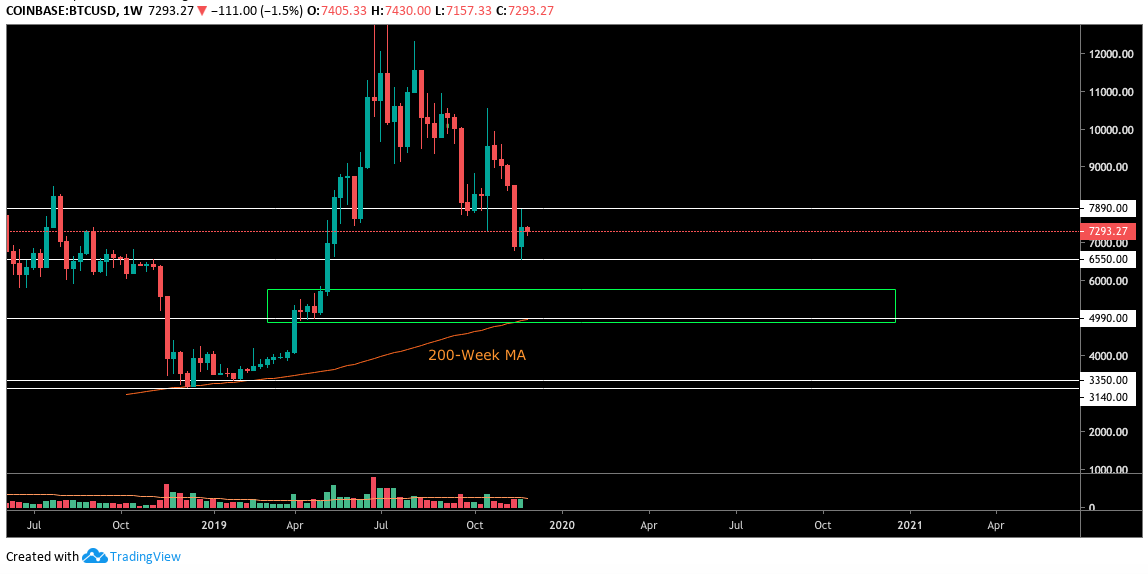 Bitcoin’s weekly chart painted a wick that tested support near $6,550 last week, hitting just below a downside wick from May 2019. Below $6,550, the coin lacks weekly support and notable price action until $5,760.

Back in April, Bitcoin’s price tallied significant price action between $5,760 and $4,890, indicating a zone of future support. This area of support also coincides with the digital asset’s 200-week moving average near $4,990.

The 200-week MA has been a major level of support in Bitcoin’s history, serving as the bottom of the asset’s last major bear market in 2018 and early 2019.

Since 2014, Bitcoin has bounced off its 200-week MA several times, never decisively closing below it and holding it as trend resistance, according to Brave New Coin’s Bitcoin Liquid Index (BLX) chart data.

Bitcoin’s daily chart shows a fair bit of bearishness. Last week’s move up past $7,800 looks to be a bullish correction amid an overall bearish trend. Unless BTC posts a decisive higher swing high past $7,880, the price may look to break down further, below $6,500.

If the range low near $6,540 is broken with force, the lack of support mentioned on the weekly time frame could lead the asset down below $6,000. Additionally, Bitcoin’s daily Ichimoku Cloud is red, indicating a bearish future while the Tenkan (blue line) is below the Kijun (red line), which is also bearish.

The asset is also quite far below its 200-day MA near $9,415, which is often seen as a benchmark for bullish or bearish market positioning. On a positive note, however, Bitcoin’s Dec. 2 candle has held on the Tenkan as support, which could fuel a test of the Kijun above.

On a shorter time frame, several candles ago, Bitcoin bounced off its cloud bottom as support before testing its cloud top as subsequent resistance. The asset’s price is currently consolidating in the middle of the cloud, although the cloud is green ahead indicating possible bullishness to come, at least in the short term.

The price recently faced rejection from the Tenkan, and the Kinjun also holds above as potential future resistance.

Crypto’s top asset seems to have the cards stacked against it for the most part in terms of trend, at least for the time being. The absence of significant weekly price action above $6,000 means a potential lack of support if the selling continues.

The $6,000 to $7,000 resistance zone also melted quite easily earlier in 2019 during Bitcoin’s parabolic move up, so there is always a chance the zone might not hold as support if Bitcoin falls further than its recent swing low near $6,500.

A move down to the 200-week MA would make sense for Bitcoin at this point, especially since each sizeable swing high has been successively lower since June 2018, unable to break market structure to the upside.

Additionally, supposed continued selling of BTC funds from the alleged PlusToken scam might drive prices lower, thwarting any bullish sentiment that may build.

On the bullish side, Bitcoin had a fairly decisive bounce near $6,500. If the asset can break above its current 4-hour Ichimoku Cloud and hold it as support, Bitcoin may be able to build some steam for further momentum upward.

Posting a decisive swing high past $7,900 would indicate a break in the downtrend, at least in the short-term, which possibly might lead to a mid-term changing of the tides. From there, the asset might be able to gain some sort of momentum to push back up and test some of its resistance levels past $8,000.

Additionally, Bitcoin has the ability to randomly change all current sentiment and bias, as seen by its historic 24-hour pump of 42% in October, although such a move did not ultimately change Bitcoin’s mid-term trend.

Bitcoin has also proven itself as volatile for the month of December, with many years yielding positive price action. Such volatility could help BTC find its ultimate bottom and reversal, or simply help the asset move up decisively from its present location.

The views and opinions expressed here are solely those of (@benjaminpirus) and do not necessarily reflect the views of Cointelegraph. Every investment and trading move involves risk. You should conduct your own research when making a decision.