Bitcoin (BTC) has reached a record-high price for the year, and as the run-up to $10,000 occurred, Weiss Crypto Rating updated the asset to an A-. Recent news has also hinted at the possibility of the crypto market making a new bull run, which some analysts believe could lead Bitcoin’s price to reach a new all-time high, as reported by Cointelegraph.

Meanwhile, altcoins have continued their multi-week surge, even outperforming Bitcoin’s cumulative returns since the start of the year and reconfirming the upward trend predicted by analysts.

Previous analysis has shown that particular days of the week offer investors the chance to make abnormal returns based on these daily anomalies. Throughout 2019, for example, data showed that Friday was the best day to buy Bitcoin for the highest daily return compared to other days.

Thus, this upcoming Friday could present another opportunity for investors to purchase, as Valentine’s Day happens to also fall on the best day of the week for Bitcoin returns since 2019.

Before reaching this conclusion, however, it would be good to analyze how Bitcoin and top altcoins performed on Valentine’s Day since 2015.

Since 2015, Valentine’s Day has been very positive for Bitcoin, as well as for Ether (ETH) and XRP. Every Valentine's Day, with the exception of 2019, has been positive in the case of Bitcoin — with the highest daily return of more than 9% occurring in 2018 and an average daily return of 4.73% over years.

On the other hand, Ether — only available since 2016 for this analysis — had its highest daily return in 2017 at 14.5%. Moreover, it presents an inconclusive behavior on Valentine’s Day because ETH had a negative return in 2016 and 2019. Nevertheless, Ether’s average return on Valentine’s Day since 2016 is set at 3.92% — meaning that all three coins had average returns over 3%. 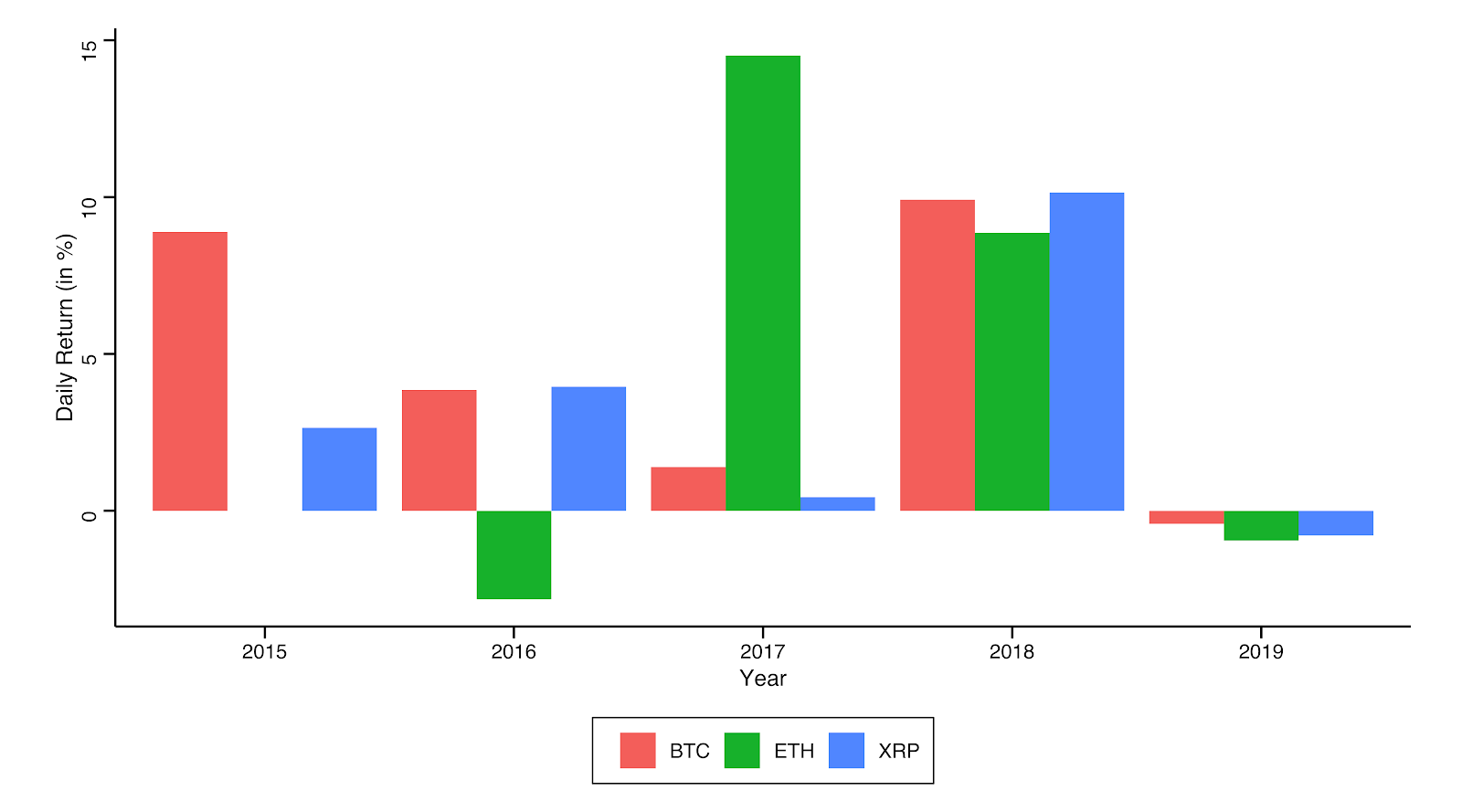 Valentine’s Day return for Bitcoin, Ether and XRP since 2015

If an investor only bought these cryptocurrencies on Valentine’s Day each year, they would retrieve a total return of over 24% in the case of Bitcoin, 20% for Ether and 16% for XRP.

Ether achieves a cumulative return close to Bitcoin’s, even though it would have only been possible to start investing in ETH in 2016 — meaning it would have been a better option for achieving a similar return to the one offered by Bitcoin, but in less time. 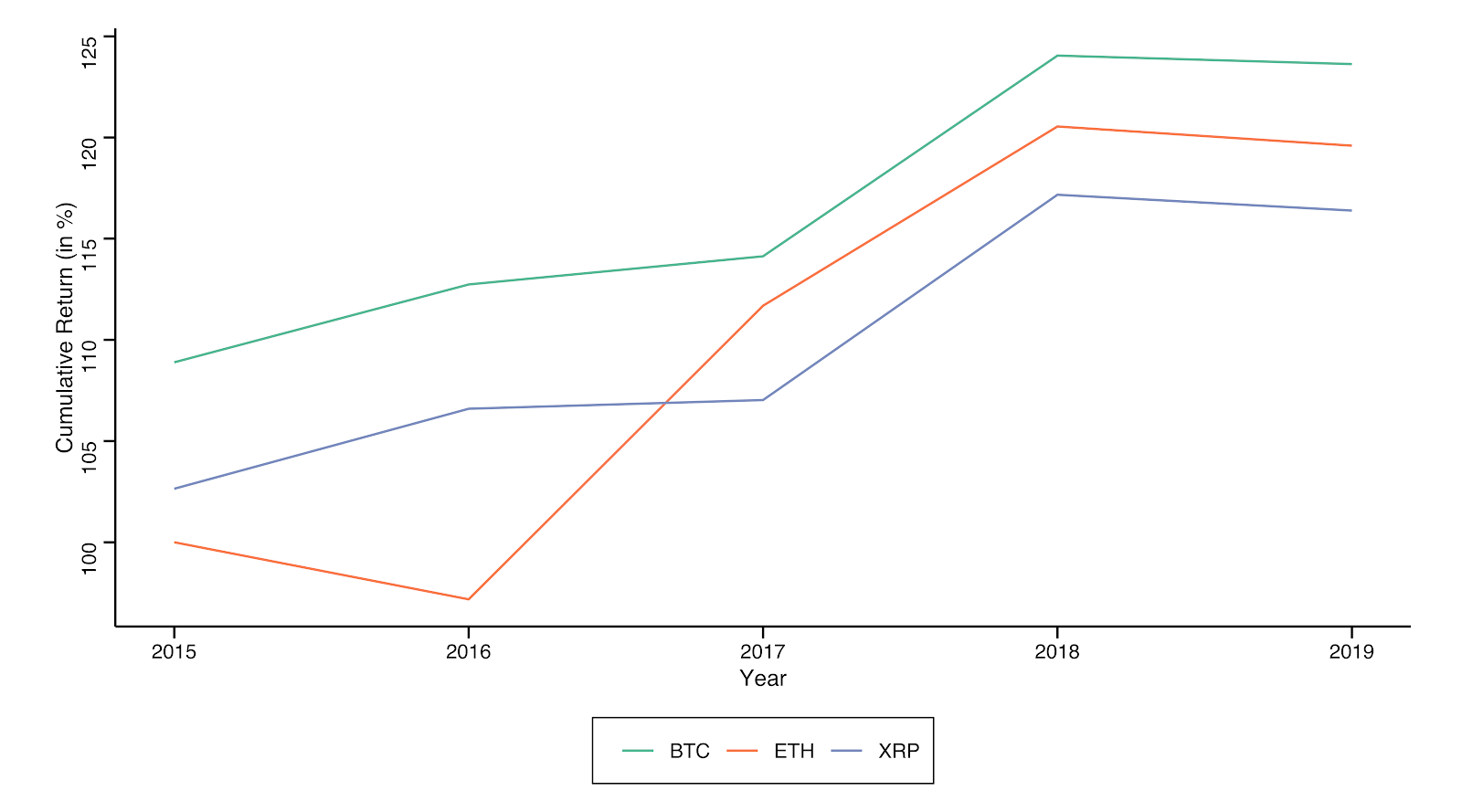 Cumulative returns (Bitcoin, Ether and XRP) from investing only on Valentine Day since 2015

Interestingly, a more notable trend occurring in price action happens on the day before Valentine’s Day (i.e., Feb. 13) across each of the top three cryptocurrencies.

For three out of the five years analyzed, both Bitcoin and XRP show negative returns on Feb. 13. However, the two years that the Feb. 13 daily return were positive would have allowed investors to recover and turn a total positive return if they only invested on Feb. 13 since 2015. In the case of Bitcoin, investors would have retrieved a total return of 2.75% — while for XRP, they would have profited 1.78%.

Nonetheless, the opposite behavior happens regarding ETH, with the Feb. 13 daily returns being negative every year since 2016. In other words, if investors only bought the currency each year on Feb. 13, they would have accumulated a total negative return of -6.8%.

Bitcoin’s price shows a consistent 24-hour-volume increase on Valentine’s Day — an average of 22% — except for 2019 when there was a slight decrease (-2.6%). The same cannot be concluded in the cases of Ether and XRP, as there is not a consistent increase or decrease in volume even though the amplitude of changes in volume is much bigger for Ether. 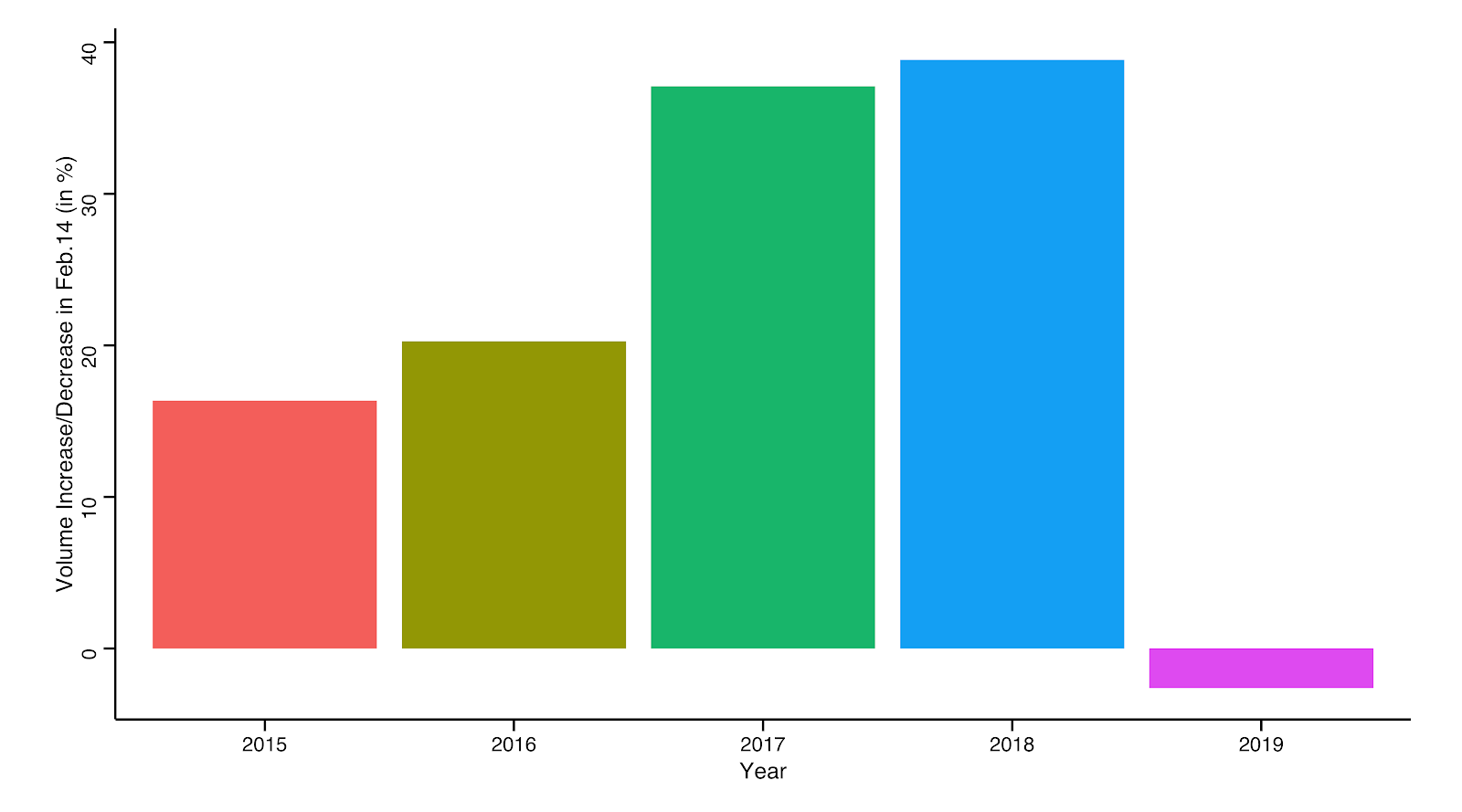 Nevertheless, with any of the top three currencies, trading volume has been on a positive trend, meaning it has been increasing as the market matures. For example, Bitcoin’s daily confirmed transactions today are four times what they were at the beginning of 2015.

Traditional market analysts have extensively studied the day-of-the-week effect as well as the effects that holidays such as Valentine's Day have on the markets. In the case of stocks, most studies identify abnormal returns occurring the day before the holiday rather than during the holiday or after.

When considering a sample of stocks from the beginning of the 20th century until the 1980s, this abnormal return could reach more than four times the usual returns on other days of the year. Moreover, the holiday effect on stocks has been felt in both the United States and internationally. However, these effects have had reduced impacts due to maturing markets and increased awareness among the public.

As we’ve seen for BTC, ETH and XRP, Feb. 13 presents a much lower return than the returns during the holiday itself. Hence, we can assume that an investor will see abnormal positive returns in the case of the top-three cryptocurrencies during the holiday. This is the opposite of what has been observed before in traditional markets.

Looking forward, these positive scenarios seen over the years — aligned with the bullish trends of the Bitcoin and altcoin markets — could lead investors to assume they might be better off investing during this period and hold off on the Bitcoin gift-spending until after the holiday.