Bitcoin price (BTC) increased over 10% over the past week, so it didn’t take long for the usual crypto Twitter suspects to start screaming that they are all bullish now. Even I saw some bullish momentum as outlined in last week's analysis, but have we seen the bottom yet? Or is there more downside to come before we resume a bull trend? 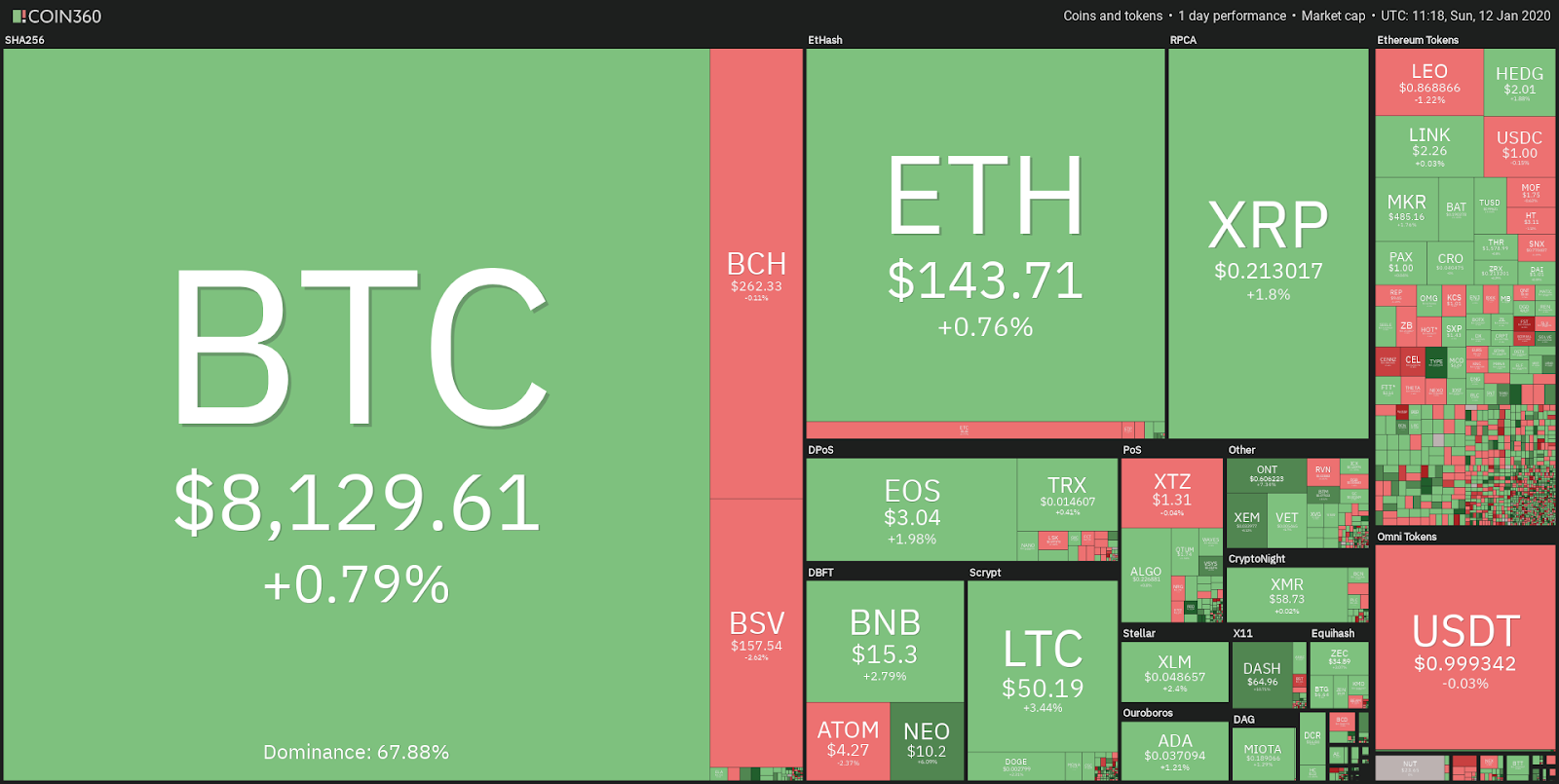 The monthly MACD is bearish 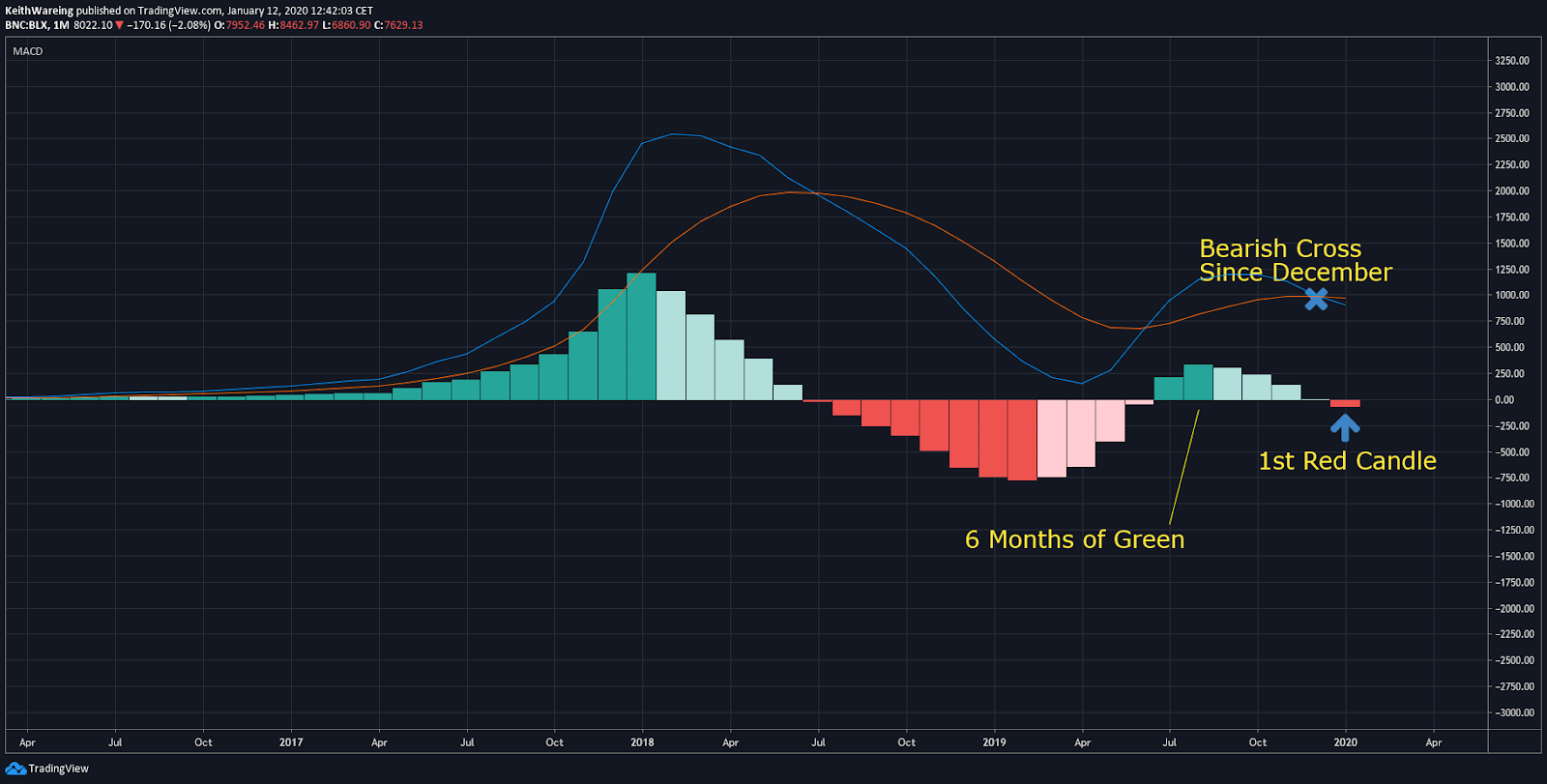 Working backward through various time frames, a look at the Moving Average Divergence Convergence (MACD) shows it crossed bearishly on Dec. 1 and the first red candle on the histogram was printed.

Bitcoin has never seen a single candle before changing the bias on the MACD in its entire history. As it’s one of the most widely used indicators for momentum trading, this indicates that there is bound to be a longer downward period than most traders would like to admit.

However, one positive that is worth taking note of is that the last bullish phase was the shortest the MACD has seen on Bitcoin, just 6 months of green before flipping red. As such, speculating on how much longer we could expect a bear market for is difficult.

If these phases are getting smaller and smaller the optimist in me suggests 4 months before we see a true bottom and reversal, which would put the pivot around April 1, 2020. 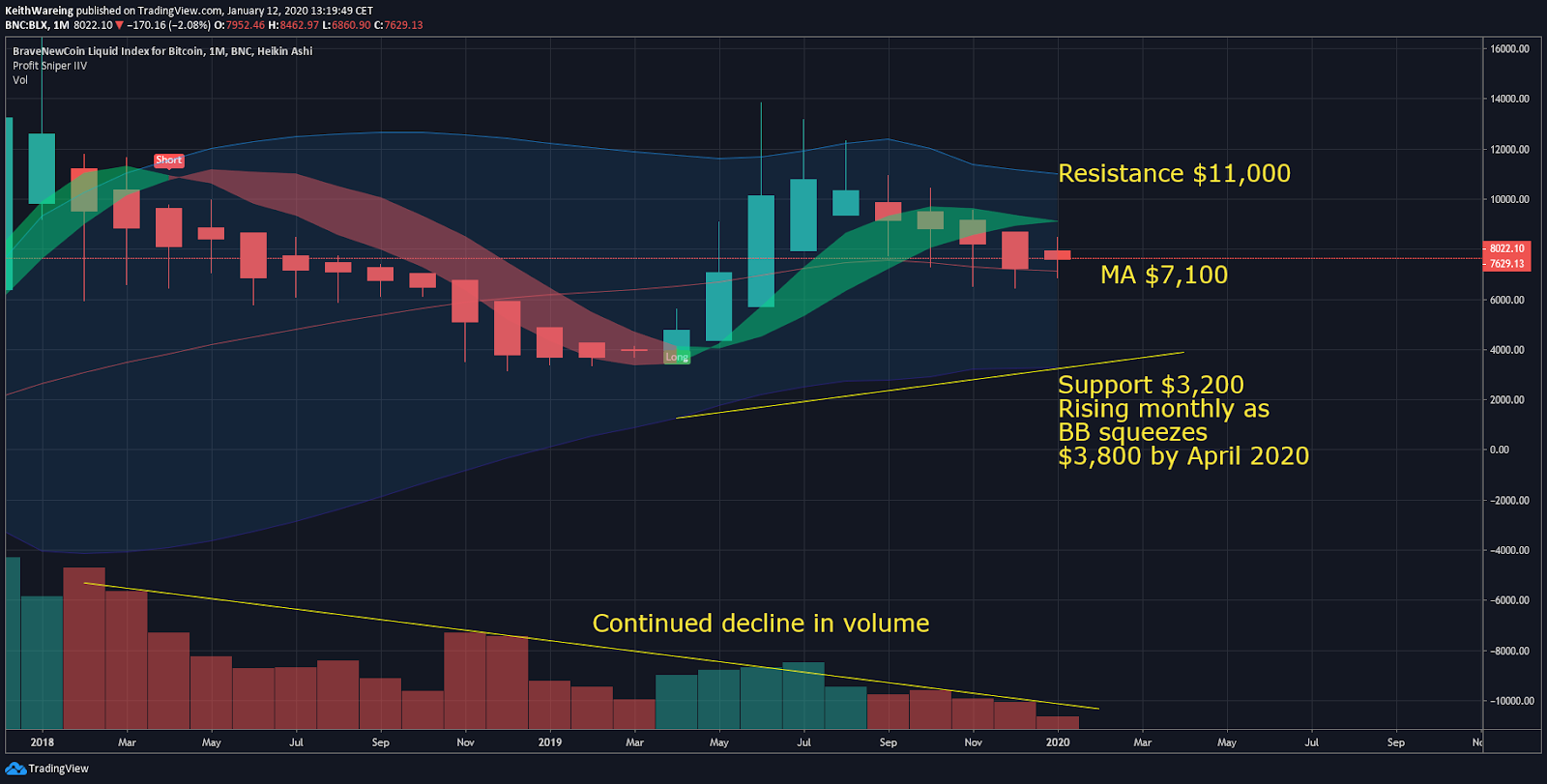 Using a combination of the Bollinger Bands (BB) indicator and the monthly volume for Bitcoin, it’s impossible to ignore how much volume has dropped off over the last 2 years. This can be interpreted in many ways. Some may view breakouts in these conditions as very short term pumps, as there’s no real interest in the asset, or some may see it as a time to be greedy when others are fearful and start accumulating.

I’m off the view, that there’s no interest in Bitcoin, therefore the price movements we’re witnessing are short term pumps as whales continue to offload their bags as they wait for the bottom.

The moving average (MA) of the BB shows $7,100 as critical support for Bitcoin. Should the price fall below $7,100 and this price level flips to resistance, we can then expect the price of Bitcoin to slowly make its way towards the support of the BB which is currently $2,500-$3,200 depending on your BB settings.

I see the bottom BB support at $3,200. However, I don’t believe we will get this low. The support on the BB is gradually getting higher by the month. If it continues at this trajectory, the support could be as high as $3,800 by April 1, 2020.

This to me is a plausible target date for the bottom since the upcoming halving is expected in May, and I’m not the only person that shares this view. Twitter user @22loops called the 2019 bottom with astonishing accuracy last year, and he’s at again with his new year's tweet that puts Bitcoin price at around $3,797. 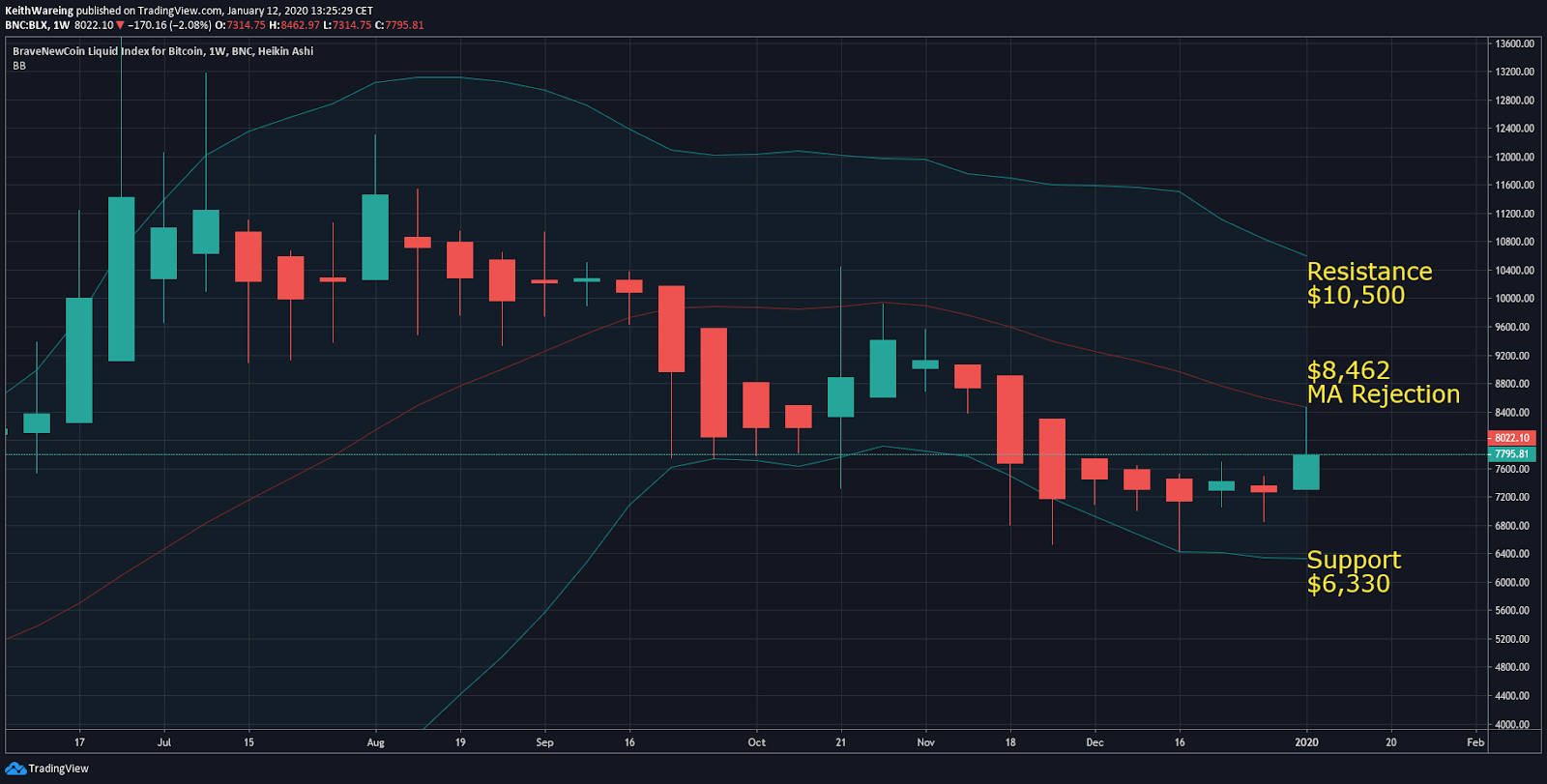 Moving over to the weekly BB, we can see where Bitcoin faltered last week. It was rejected precisely at the MA of $8,462 leaving the digital asset in the lower part of the Bollinger Bands.

Therefore, until Bitcoin flips the MA to support, there’s no real reason to be bullish just yet.

The support here shows $6,330 as the last stronghold for Bitcoin before beginning to accept the likelihood of a sub-$4,000 Bitcoin price. However, should Bitcoin find itself on another run, breaking past the $10,000 barrier doesn’t seem to be where the issue is, but slightly higher around $10,500 seems to be where we’d expect to see BTC struggle.

Currently, both of these scenarios are too early to call, but with that being said, the weekly MACD is definitely giving a reason for the bulls to be excited.

Bullish momentum is returning to the MACD 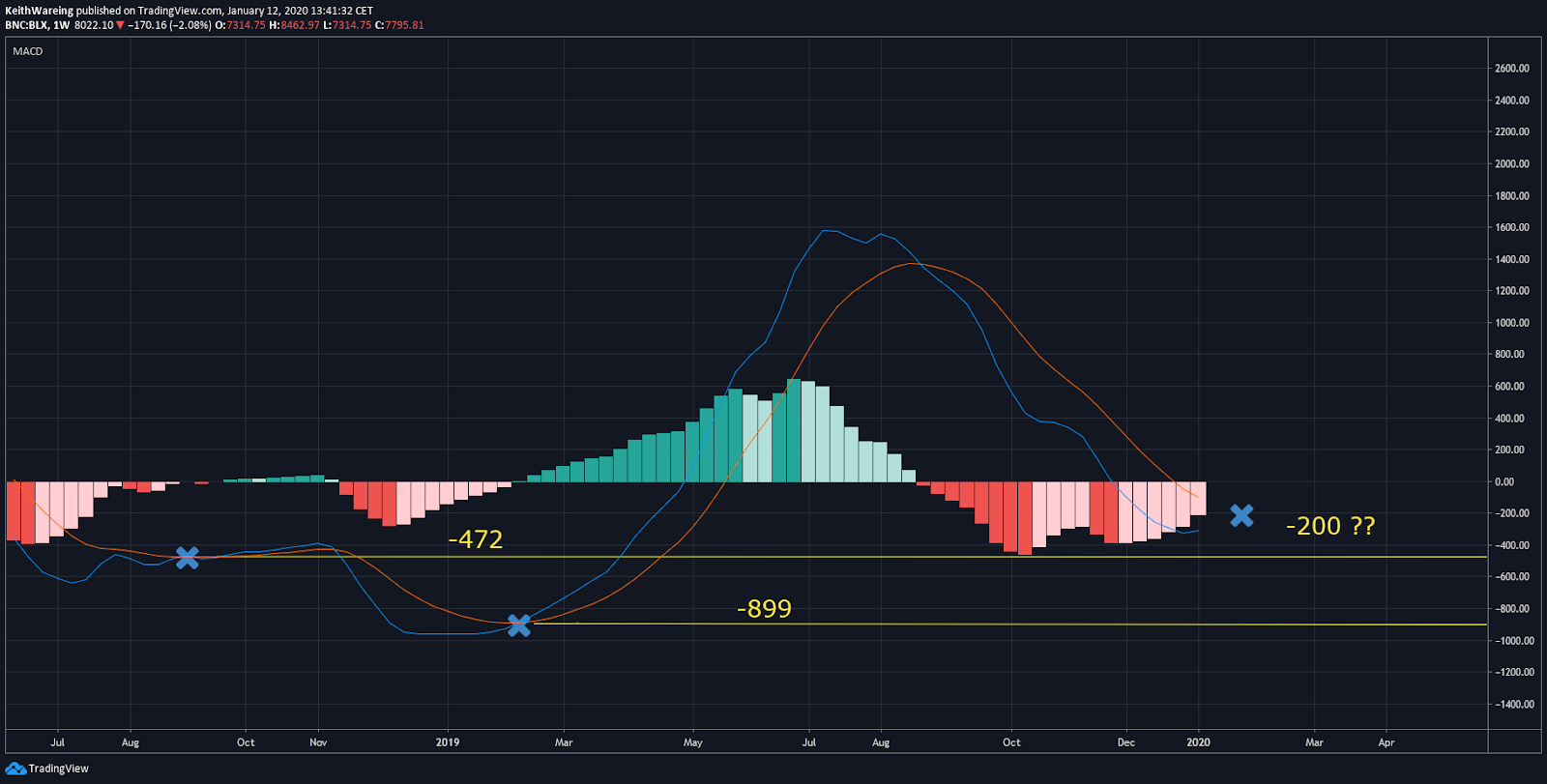 Whilst I’m a big fan of following the weekly MACD as a very reliable indicator for Bitcoin, there is one element that I can’t overlook in its current setup. If the Bitcoin price continues to stay in its current range for another 2-3 weeks, the MACD line is set to cross bullish.

However, the positioning around the zero line doesn’t look too hot. If we take a look at the last 2 bullish crosses, they occurred at – 472 and -899 with the latter being the cross that had more momentum.

The cross at -472 resulted in some bullish momentum, but shortly after, the Bitcoin price fell again, and it crossed into a bear trend. What is concerning here, is that should Bitcoin cross bullish on the weekly MACD, it’s likely to occur somewhere around -200 below the zero line. But what does that mean for the next bullish move?

History tells us, that perhaps it’s too early to be screaming “Bitcoin bull run” from the rooftops just yet, and this is further echoed by the rather weak Relative Strength Index (RSI) indicator, which is currently only showing a reading of 46.53 on the weekly timeframe.

The daily charts, however, are starting to tell a story of what to expect when you combine all 4 indicators mentioned in this analysis.

Is the daily timeframe bullish or bearish? 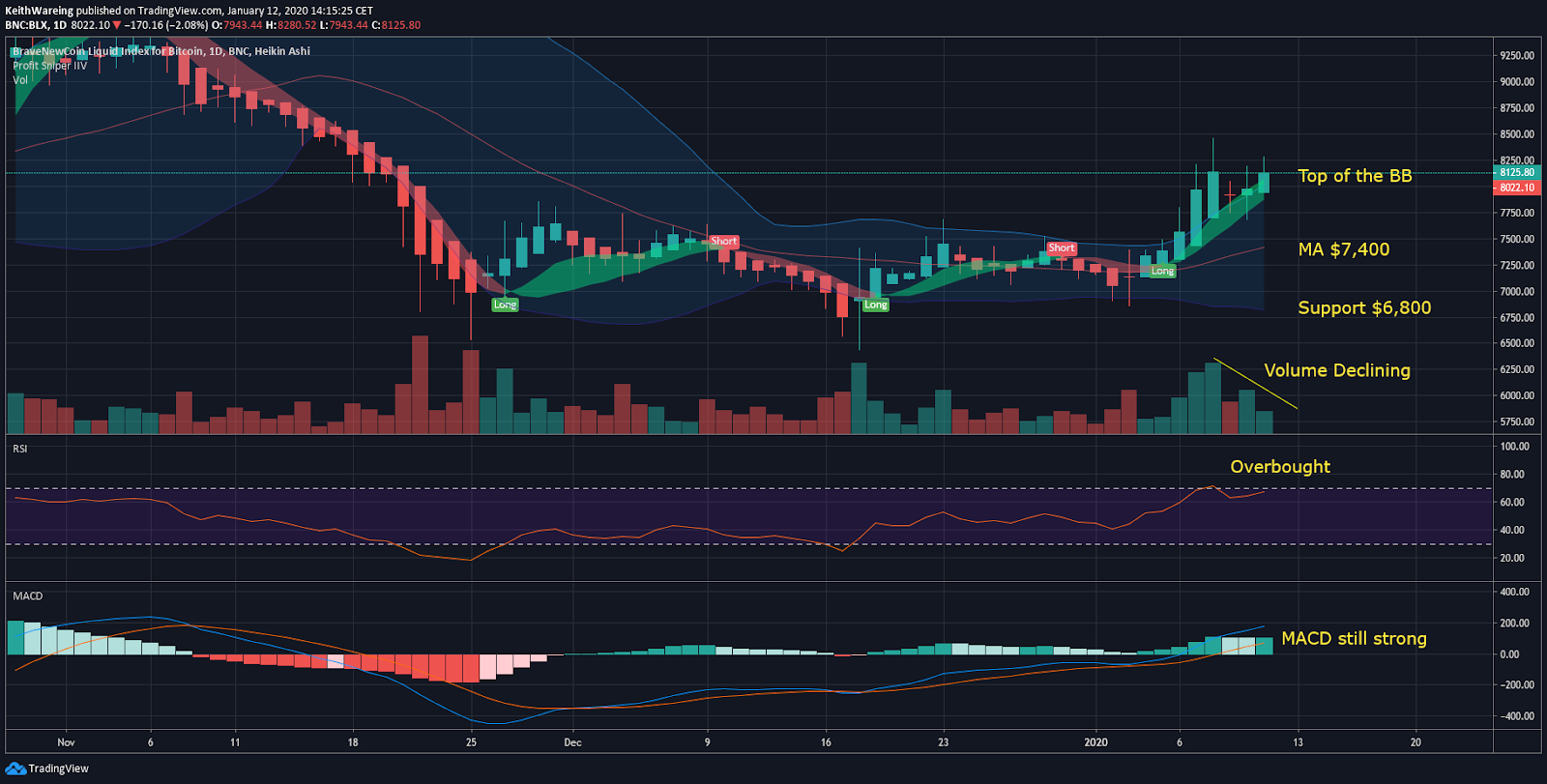 Above is what I see as a short setup. The Bitcoin price is at the top of the BB. The RSI is overbought, and the volume is declining, however, volume is typically thinner at the weekends.

The last thing I’d look at is for the MACD to cross down. At present, the MACD is still strong and is yet to show signs of crossing down.

If there’s a decline in the price, the MACD will start to cross down, and from here I’d be looking at the BB MA as my target price which is $7,400; and this target I feel is realistic due to the gap left on the CME chart. 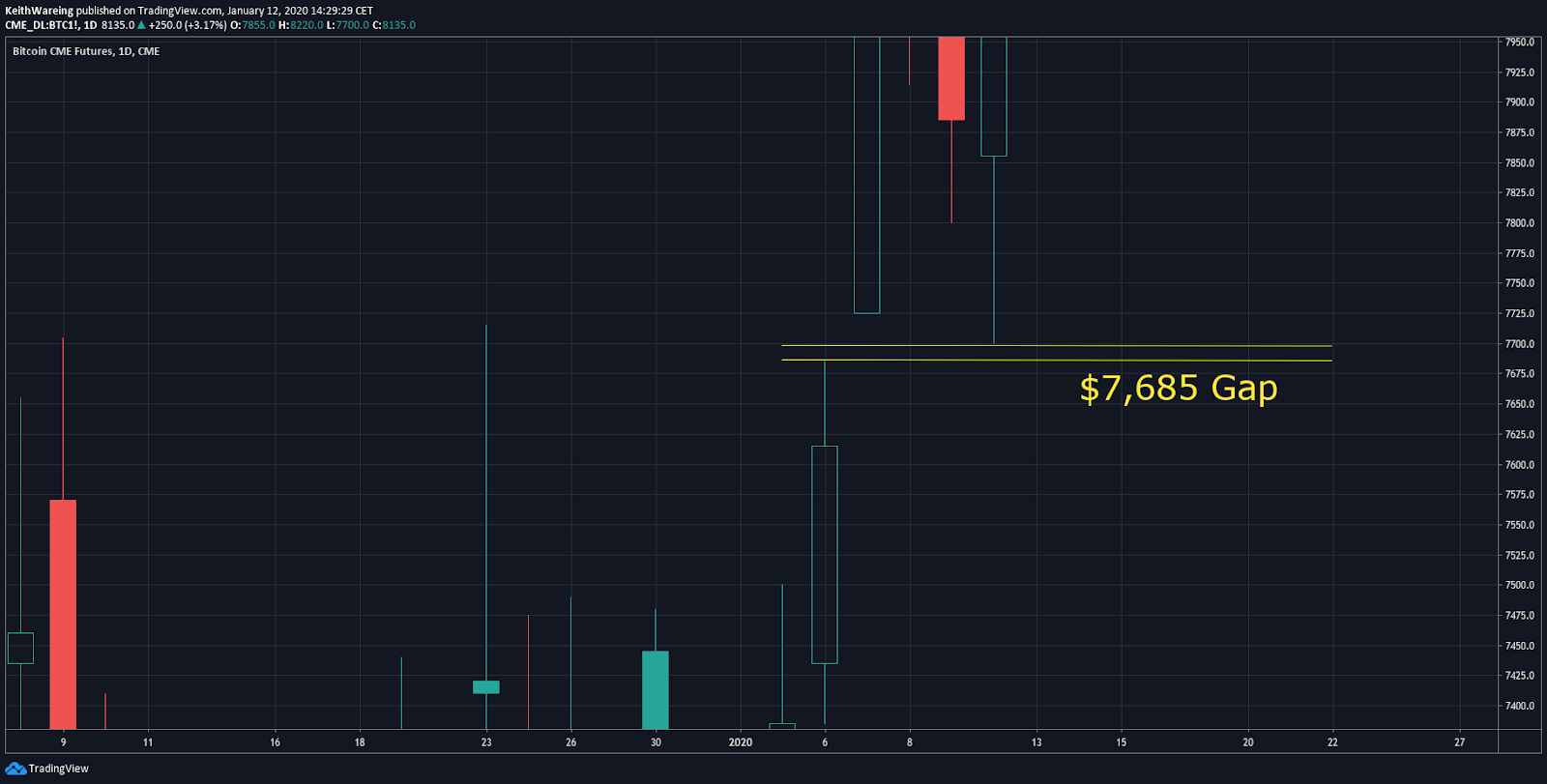 The CME is showing a gap at $7,685. Whilst this is a very tight gap that some may argue nearly closed last week, the fact remains it is there on the charts for all to see.

Closing this gap would most certainly force the daily MACD to cross bearish, and potentially end the bullish momentum for the price of Bitcoin.

If the CME gap fills, and Bitcoin continues to fall from $7,865, then the levels of support to watch would be $7,400. If this level fails to hold, the monthly MA on the Bollinger Bands shows that $7,100 is the price to defend.

If both these levels hold, the last chance saloon for Bitcoin is $6,800 before the hodler doomsday scenarios start playing out, and from here I’d be looking for another MACD bear to bull cycle before being bullish again.

Not much has changed since last week. The daily and weekly MACD are both bullish and should Bitcoin continue on this path the key resistance that must be broken remains at $8,500.

Breaking this level would change the path of Bitcoin massively, opening up much larger leaps in price towards $10,500-$11,000 levels. That being said, 2-3 weeks of flat price action is equally bullish for Bitcoin in the medium term.