Bitcoin price (BTC) is currently resting just shy of $7,500 after an impressive rally from around $6,850 on Friday, Jan. 3. Does this mean the bulls have taken control? Or is this a final relief rally before Bitcoin drops to fresh lows? 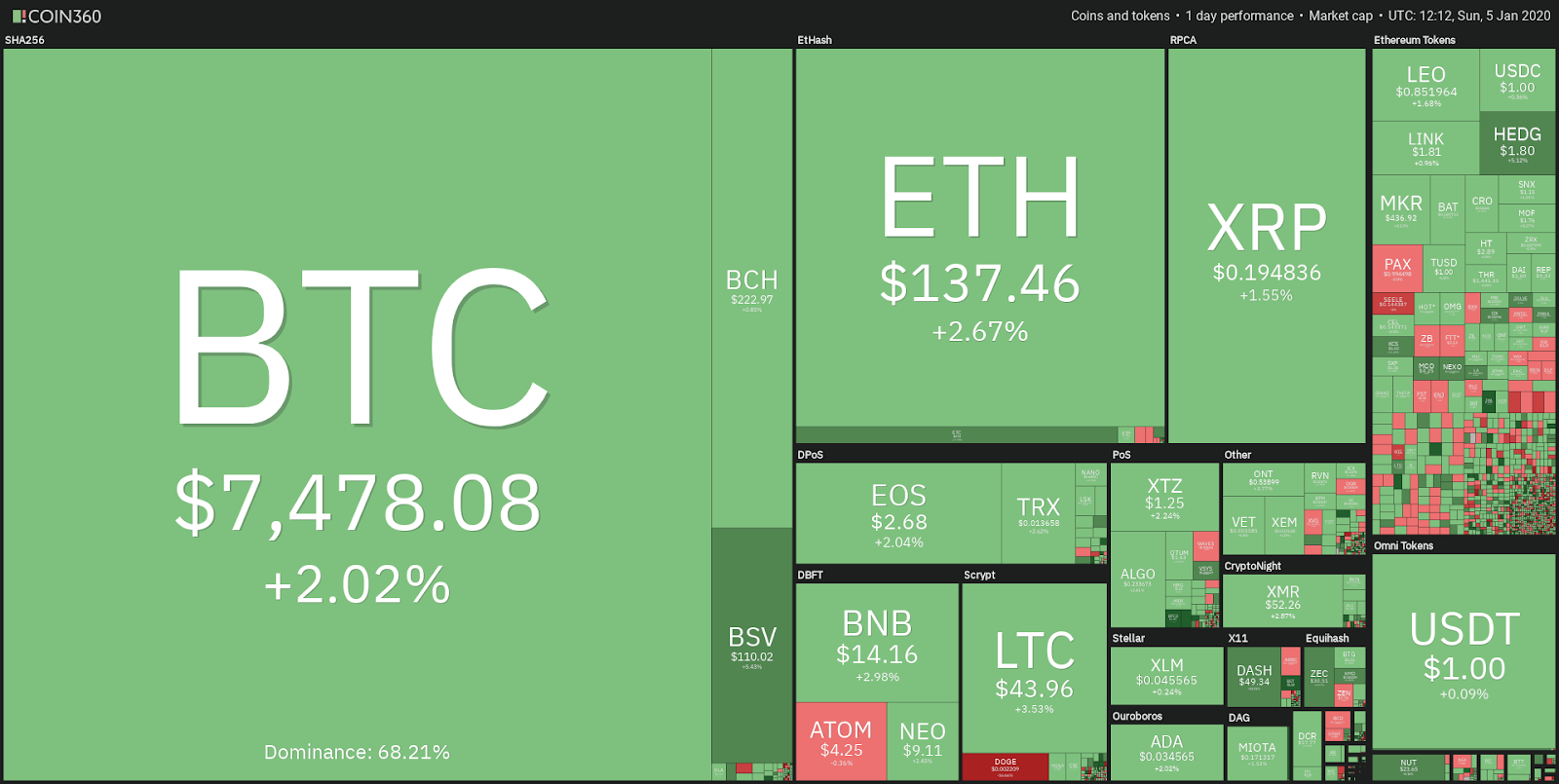 In last week’s analysis, I highlighted that the CME gap is becoming a regular trading event each week, and less than 12 hours after the analysis was printed, the gap filled to the exact price of $7,265, before the current trend resumed.

In this case, the price continued a five-day bear trend until it reached a bottom around $6,850 on the 11th birthday of the Bitcoin genesis block.

What happened next was a 7% pump that many speculated was largely due to the U.S. drone attacks that killed a top Iranian general. This was quite possibly the most idiotic thing I have ever heard. If my country was being bombed, the last thing on my mind would be to buy Bitcoin.

However, something else occurred on Jan. 3 that could have been responsible for both the decline prior to this date and the sudden price increase afterward, and that is “proof of keys.”

The yearly tradition was started by long-term Bitcoin advocate Trace Mayer, who has been urging users to reclaim their monetary sovereignty by removing all of their Bitcoin from exchanges and controlling their own private keys. 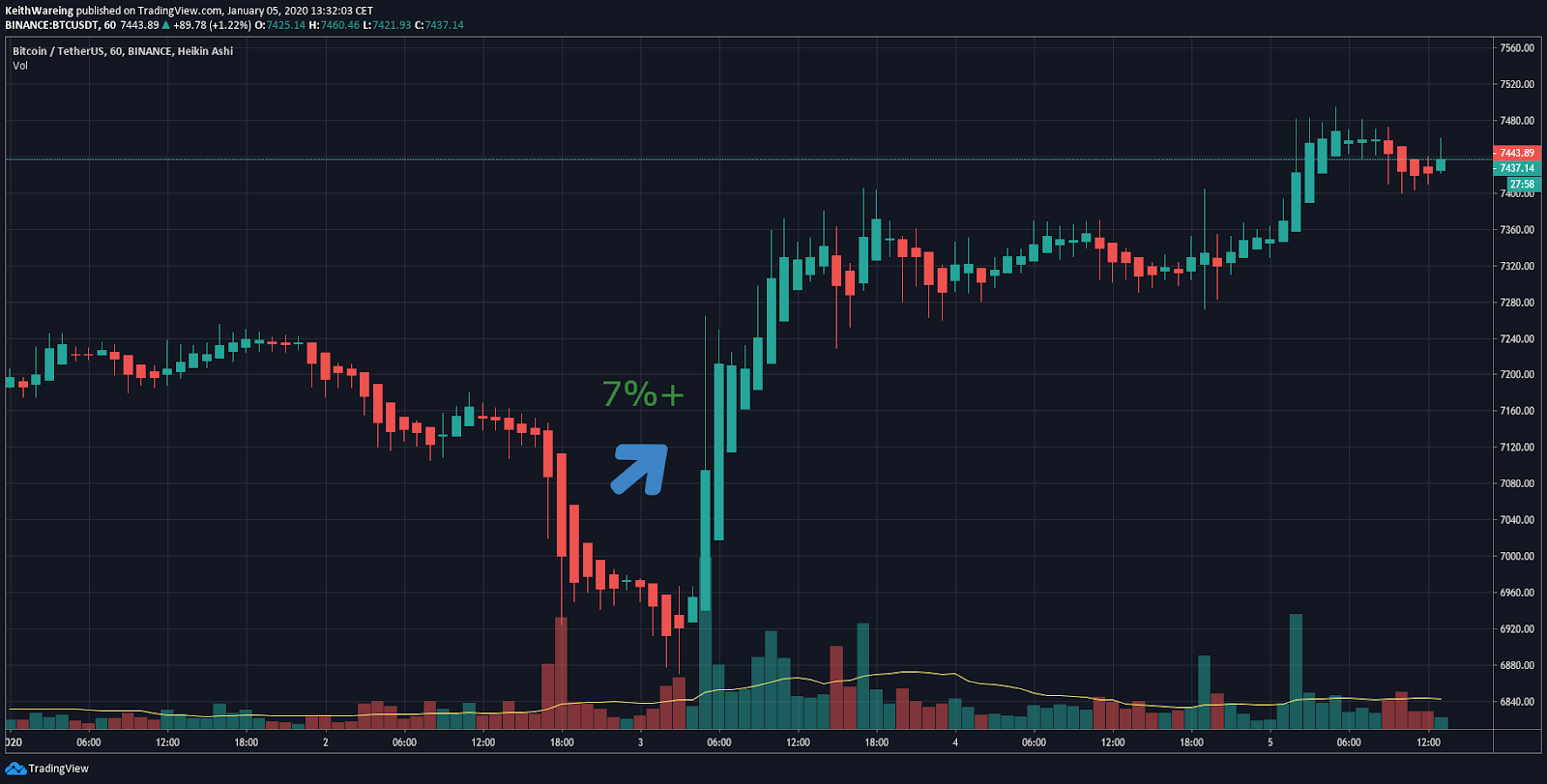 Now, this may be put into the tin-foil hat category, but the volume for Bitcoin was significantly lower in the days approaching Jan. 3 than afterward. It’s no secret that exchanges rely on volume to remain profitable, and what better way is there to entice people to send their Bitcoin back to exchanges than the price pumping by nearly 10%.

Furthermore, since exchanges are technically the biggest whales out there, it wouldn’t take much to move the price up, especially during a period when the volume is low, which can be seen clearly on the hourly chart for Bitcoin.

So with this event behind us, will we see Bitcoin resume its bear trend, or are the bulls back in control? 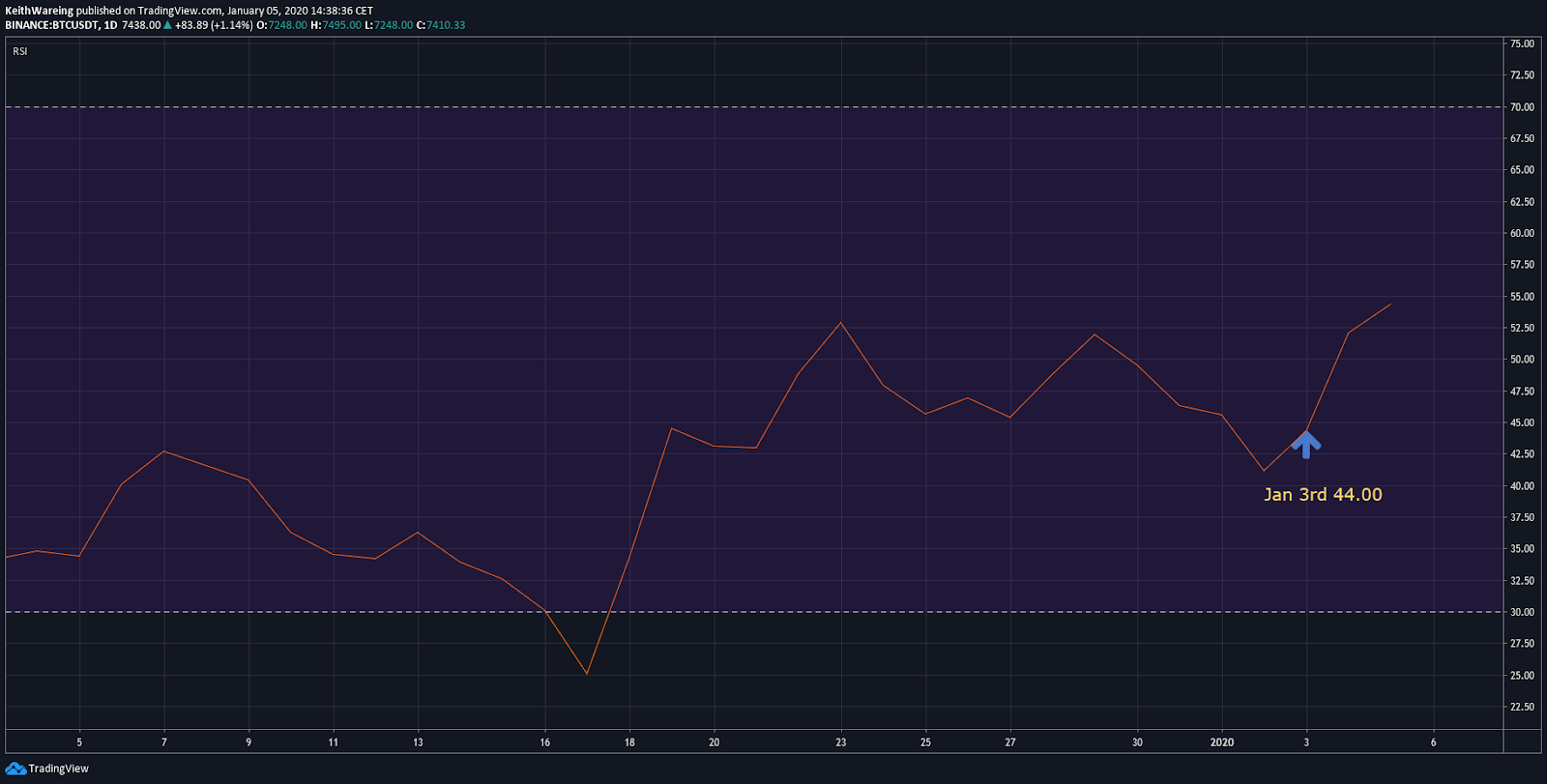 Taking a look at the Relative Strength Index (RSI) indicator on the daily, it shows we are still in very neutral ground. Also, any speculation that the Jan. 3 pump was purely technical has no merit as far as this particular indicator is concerned.

This is further echoed on the weekly chart, with a reading of 41.40. So there’s nothing to see here folks, move along. This indicator tells us what we already know — that we’re currently in a tight range where sellers are pretty much matched with buyers. 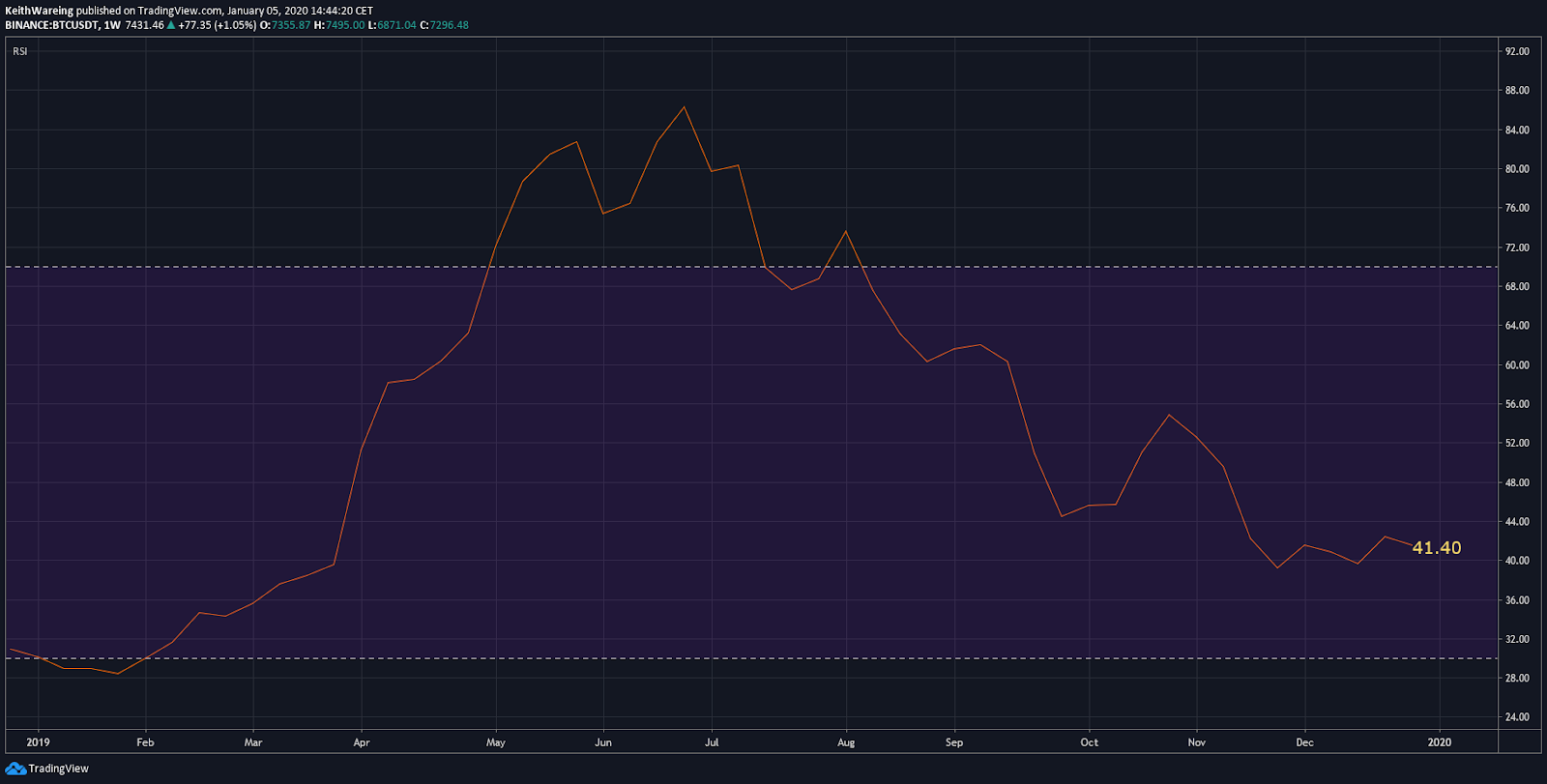 What we need to see first on the RSI is some cast iron signal that we’re either overbought or oversold for any action to happen. But are there any other key indicators that can shed any light on the next possible move?

The MACD is becoming more bullish by the week 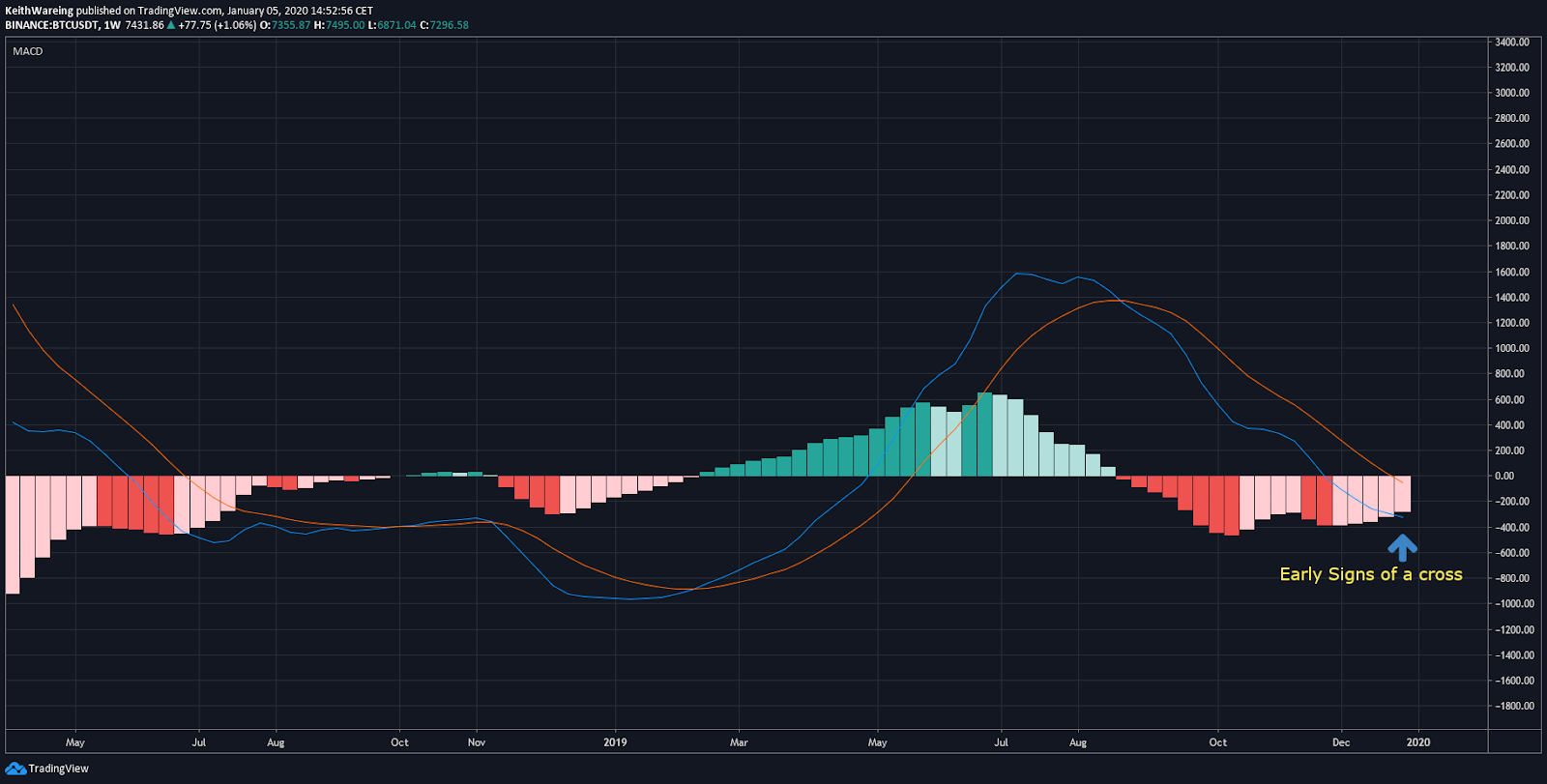 The Moving Average Divergence Convergence (MACD) indicator on the weekly is continuing to display signs that bullish momentum is returning.

As such, crosses on the weekly MACD have been incredibly reliable and telling of what one can expect from BTC/USD in the medium term. However, to gauge where we can go, another of my favorite straight out of the box tools is the Bollinger Bands (BB) indicator. 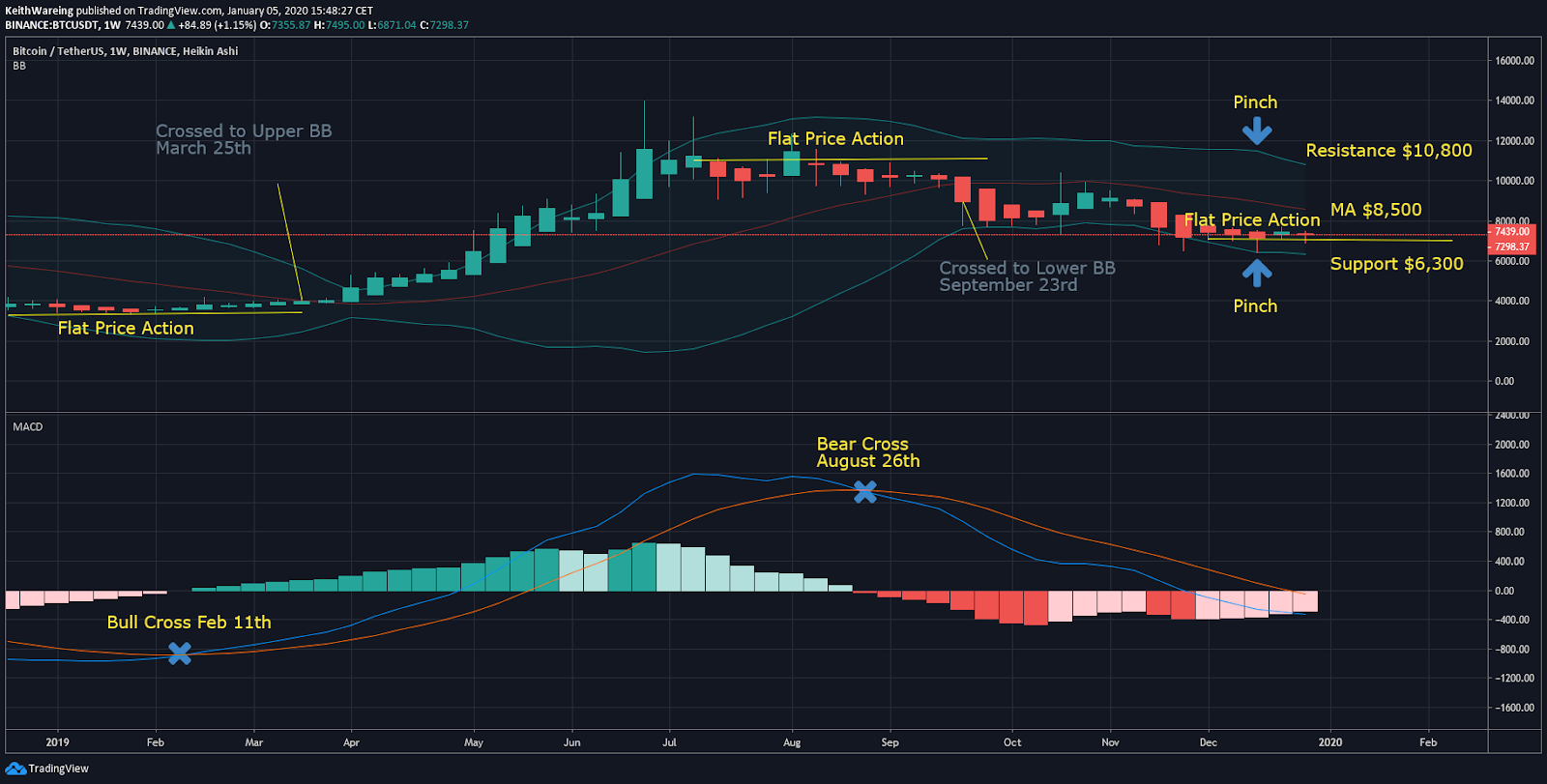 The reason I use both the MACD and Bollinger Bands (BB) indicator together is that history shows us that 4-5 weeks after a MACD cross, the price changes from being at the bottom or top of the bands.

After a flat first quarter in 2019, when Bitcoin bottomed, we saw the MACD cross bullish on Feb. 11. A few weeks later, on March 25, we saw the price flip from trading below the BB moving average to above the moving average, and onwards to the year high in June.

We then saw some relatively flat price action between July and September, coupled with a bearish MACD cross on Aug. 26, which led to Bitcoin trading below the moving average again, which is where we are now.

To me, it seems that Bitcoin is halfway through another period of relatively flat price action, and should the next four to five weeks bring us another bullish MACD cross, then history shows us that four weeks after that, we could expect to be trading above the BB MA again, which would put Bitcoin at over $8,500 and again on the path to $10K and beyond.

The question now is: are we out of the bear trend? 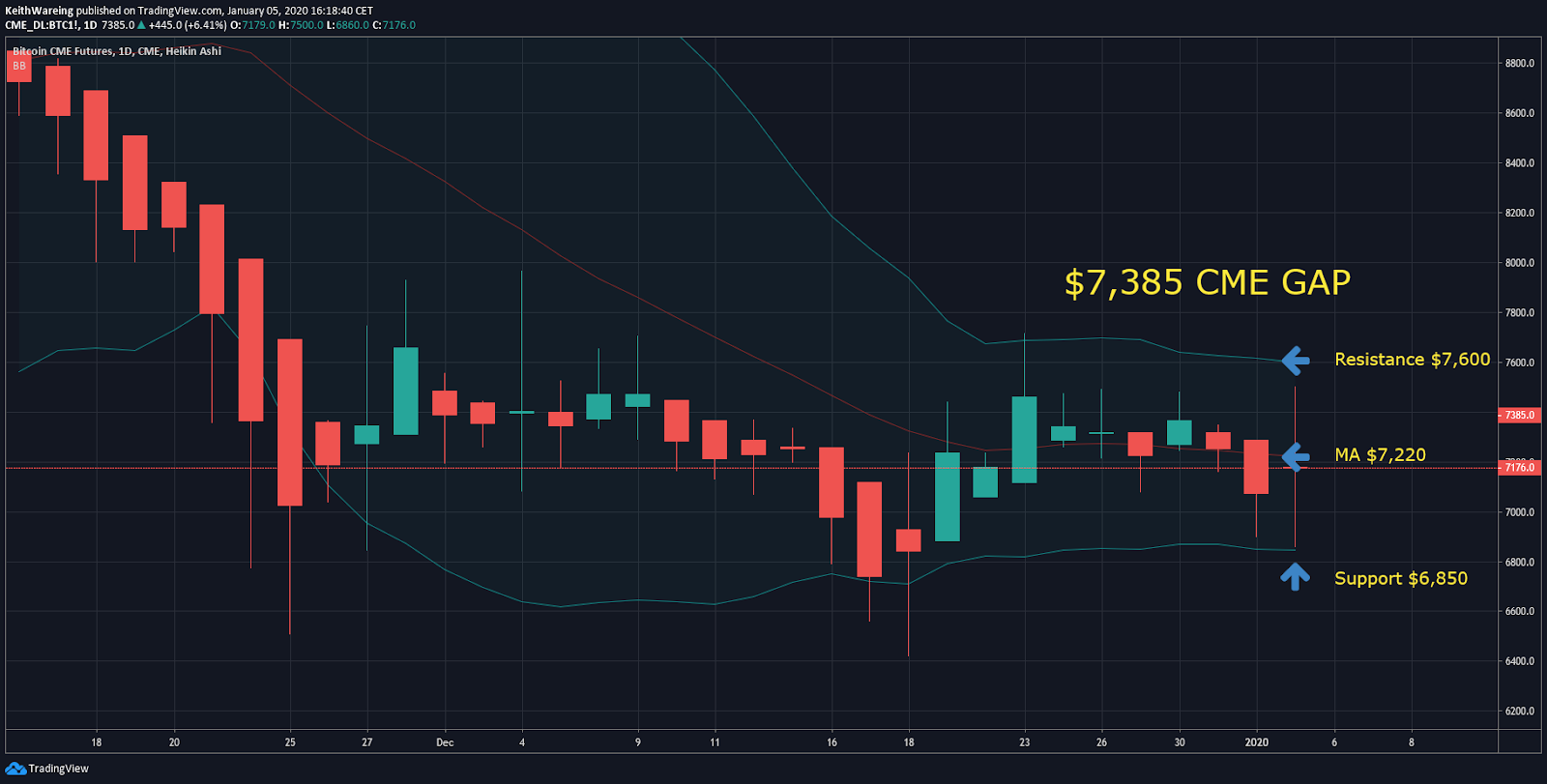 An indication as to whether the bulls have taken control or not would be to observe what happens with Bitcoin’s price direction should the CME gap at $7,385 be filled this week.

If the price continues to fall below $7,385 then it would suggest that we are still in a bear trend, with support being found around the BB MA of $7,220 on the daily chart. Should this level fail to hold, the next key level of support would be around $6,850 followed by the support level on the weekly, which is $6,300.

However, should this scenario play out, the knock-on effect would be that the MACD would blow open and set a bullish cross back several weeks on the weekly chart, meaning more pain ahead.

And if all three support levels fail to hold, this opens up $5,000 Bitcoin as a likely reality in the short-term, possibly even lower in the medium-term.

Should the price bounce back after the CME gap fills, it could mean that the bottom is behind us. I’m personally doubtful whether this is the case. However, the key resistance to break would be $7,600.

If Bitcoin can both break $7,600 and flip this into support, then the next point of resistance will be around $8,500. Should Bitcoin soar past $8,500, then $10K Bitcoin is then in play. However, it would be equally bullish if the price remains in the high $7K, low 8K region for two to three weeks, as the weekly MACD would then cross bullish.