Ethereum (ETH) based cryptocurrency payment network Matic has described as “baseless” claims it manipulated the price of its token after it crashed 60% in minutes.

In a blog post on Dec. 10, executives addressed community participants who saw the value of the project’s in-house MATIC token lose most of its value hours before.

According to data from Coinmarketcap, MATIC/BTC reached a high of 562 satoshis on Monday, before diving to lows of just 195 satoshis.

Despite a subsequent correction above the 200 satoshi mark, the pair was still trading down 50% at press time on Tuesday. 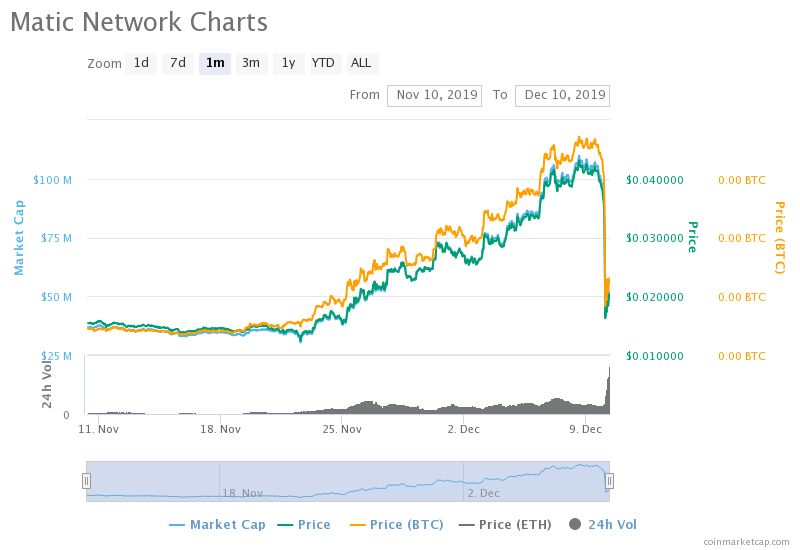 “We want to strongly state that the allegations of token movement from our Foundation account, made by a FUD account against Matic team are completely baseless,” the blog post read.

Matic was one of the first so-called initial exchange offerings (IEOs) to raise funds on Binance Launchpad, the dedicated incubator from cryptocurrency exchange Binance.

As Cointelegraph reported, after losing value following the IEO in April this year, a sudden spurt of bullish action saw MATIC/BTC gain considerably during the last week of November.

“Rule number one in trading: never buy an explosive green candle and never FOMO (fear of missing out) after the fact. There’s always a retrace,” he wrote in analysis on Nov. 26.

That retrace saw MATIC reverse the entirety of its gains prior to the modest rebound.

In the face of criticism, however, Binance CEO Changpeng Zhao (known as “CZ”) was keen to defend a home-ground project from potentially unfounded criticism.

“Our team is still investigating the data, but it's already clear that the MATIC team has nothing to do with it,” he wrote on Twitter.

CZ added that major bagholders were to blame for the volatility:

“A number of big traders panicked, causing a cycle. Going to be a tough call on how much an exchange should interfere with people's trading.”